Here’s where we left my punchneedle embroidery globe at the last update: 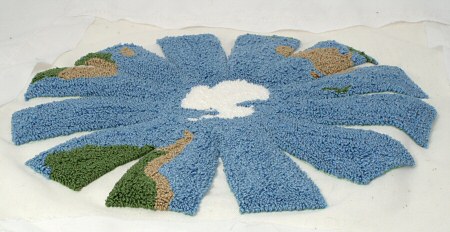 This next stage is the real test of my design: I based my idea on the concept of a papercraft globe I’d once seen that turns 2D sheets of paper into a 3D globe. So, in theory, I should be able to do the same thing using a 2D embroidery. The moment of truth: I hand-sewed up all the unembroidered darts, to (fingers crossed) convert the flat piece into a hemisphere, and… 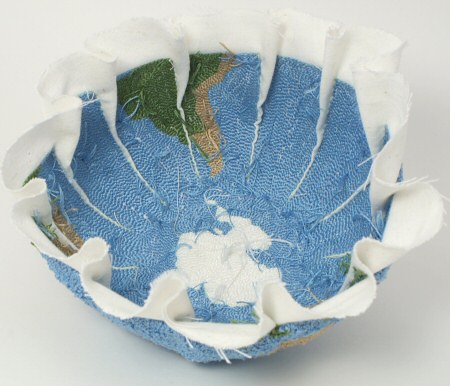 It worked! I now have one very nice hemisphere. Thanks to that extra-dense punching I did, the seams are pretty much invisible from the outside. You’ll have to take my word for that, because I’m going to be a little bit mean and only show you the inside of the hemisphere for now – I have to save something for the big reveal once I’ve punched the other half of the globe…

There’s a lot of work left to do to get it finished – the second half should actually take longer than the first: the northern hemisphere has more landmasses, islands, lakes, and general detail that I included in my pattern, so it’s going to take a lot longer to punch than the (mostly blue) southern hemisphere.

But I’ve found something to make my punchneedle go much more quickly from now on! This is a punchneedle spooler:

Spooler for Cameo punchneedle (image courtesy of The Punchneedle Marketplace)

It sits in the top end of the punchneedle. You wind your floss onto the spool and can punch for the entire length of a skein instead of having to rethread the needle every metre or so (the floss can easily get tangled or trapped with a length much longer than that). And, with a 2-step threading process, that’s a significant time saving – I think it took me almost as long to thread the needle as it did to use one length of floss!

Slight problem though: punchneedle supplies are pretty scarce these days… I don’t know of any Canadian suppliers of this attachment, and I knew it would cost a lot in shipping to import one from the Punchneedle Marketplace. So what’s a crafty girl to do? Get crafty! 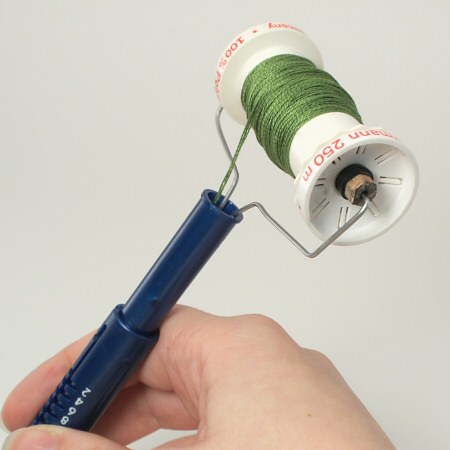 The spool rotates freely on the pencil, so more floss is fed to the needle every time I make a stitch. Isn’t it great to be crafty?! It’s all made with supplies I had on hand, and it works brilliantly!

Thanks in part to my new spooler, my Northern Hemisphere is coming along much more quickly – I wonder if I’ll be able to finish the whole globe over the Christmas holiday…

I have news. Big news. Mind-blowingly huge news. And it’s not directly craft-related, but will impact my entire life (including my business), so I need to share it with you…

My husband has been offered a job at the observatory in Cape Town, South Africa, and he’s accepted it!

I’m very proud of Dave – he’s worked really hard for years to find a position like this and it’s a great opportunity. We haven’t figured out yet exactly when we’ll be leaving, but it’ll be some time this winter. Can you believe it?! We’re moving to South Africa! 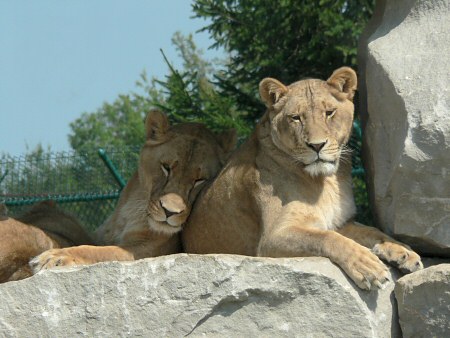 Pics from our trip to African Lion Safari (how prescient!) last year

It is great news, but, PlanetJune-wise, it’s really thrown me for a loop. I had a book contract literally sitting in my inbox waiting to be signed that I’ve had to turn down because there just wouldn’t be time to write it while organising an intercontinental move – so frustrating! And it’s obviously going to cause some changes with my business.

Luckily for me, PayPal started up in South Africa earlier this year. It has extra fees and complications, but I’m just glad it exists at all – I don’t know how I would have managed otherwise!

Pattern downloads in my shop are, of course, instant and automatic, so there’ll be no disruption in service there. The only difficulty will be in shipping physical items (eyes, stitch markers, stuffing tools) – I’ll have to shut down that part of my shop for a couple of months while everything is being shipped over, but that won’t be for a few months, so don’t panic! I’ll keep you updated on the situation when I’ve figured out what needs to happen and when. 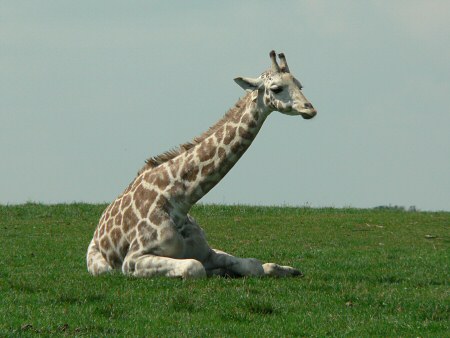 I’m still reeling from this – it doesn’t seem possible that it’s really happening! I’d be lying if I said I wasn’t overwhelmed and a bit terrified too, but it’s definitely going to be an adventure, and it’ll provide endless inspiration for my future designs.

I’ve run three crochet-alongs (CALs) this year: Spring, Summer and Fall. I’ve been a little disappointed with the outcome: approx 3-4 times as many people used the CAL discount code than actually submitted completed projects to the CAL roundup. Some people contacted me to apologise that they didn’t manage to complete their projects in time, and I can I understand that – life sometimes gets in the way, despite our best intentions – but these numbers are just too high for that to apply to everyone, and it makes me really sad that some people must have been abusing my generosity by using my 20% discount although they had no intention of participating in the CAL 🙁

I’d like to finish the year on a high note, and actually reward the people who do want to participate in the CALs without losing money to the opportunists who just want a cheap pattern, so we’re going to do it differently this time around, and have a crochetalong contest! 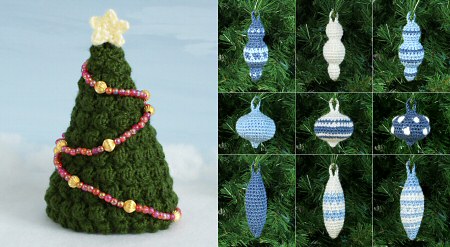 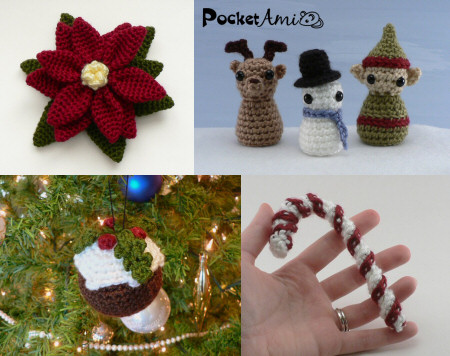 Here’s how it works:

Grab this button for your blog!

I hope this will be fun and encourage lots of participation! This is a new CAL model for me, so please let me know if anything is confusing. I’ll answer any questions in the comments or by updating this post.

I hadn’t planned to do a Christmas pattern this year, as I have so many already and it’s getting more and more difficult each year to think of something original! I’ve had the idea of a set of tree decorations kicking about in the back of my mind for a couple of years now, but it suddenly coalesced into a real design idea a few weeks ago, and this is the result: 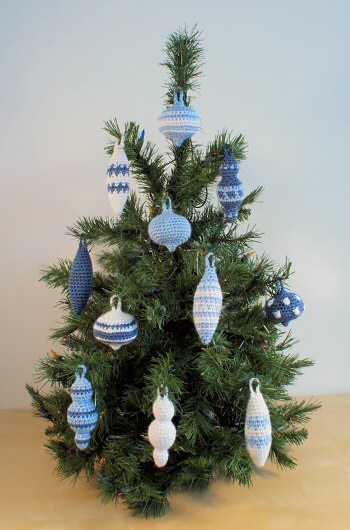 Christmas Baubles! My pattern includes 9 complete designs (3 plain baubles and 6 different patterned designs) that you can make in your favourite seasonal colour scheme, using 2 or more colours. I used white plus 2 shades of blue for mine; you could do a colour scheme as simple as traditional red and white, or brighten up your room while you use up your yarn scraps by making each ornament in a different colour scheme. 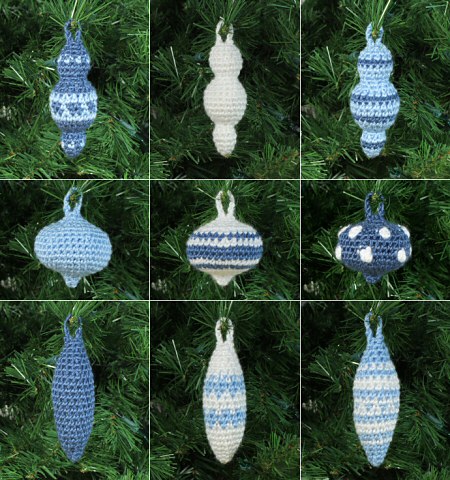 I’ve also included instructions on crocheting them all into a garland like this – wouldn’t that look great along the mantelpiece?

I hope you like my bauble collection! It’s up in the shop now at an introductory price.

So tell me… what colour(s) would you make them in?

I wasn’t feeling great last weekend so I treated myself to a day resting on the sofa, working on my punchneedle globe project. And I’ve finally made some serious progress: I’ve finished the southern hemisphere! I thought for a while I’d never reach this point – I finished the land masses months ago, but there’s just so much ocean below the equator (i.e. blue, blue, and more blue – so boring!). Here’s where it was last time you saw it: 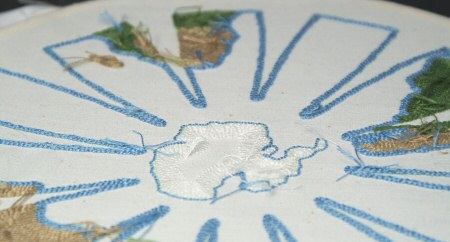 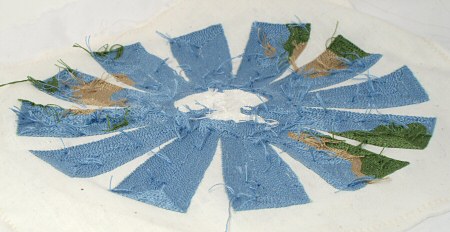 You can see how close I made my stitches – in punchneedle there are supposed to be gaps between the rows of stitches, but I intentionally covered the entire surface with stitches so there’d be too many loops on the front. By the way, I always keep those straggly ends long and then clip them at the end, but they aren’t going to show, so I don’t think I’ll bother clipping them (I’m such a rebel!) 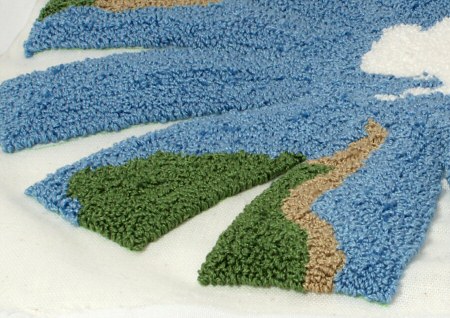 It looks like my over-dense punching strategy is going to work – see how the piece wants to curl under at the edges already? The excess of loops on the front means that the front surface wants to be larger than the back, making it curl. It should mean that when I stitch up the globe, there won’t be any visible bald patches between loops, even when it’s curved into a sphere. Aren’t I smart?!

Thoughts I had while I was punching the neverending blue oceans:

Now for the (fingers crossed) magic part: turning the 2D into 3D. My idea is probably self-explanatory; I’m going to stitch up those ‘darts’ of unembroidered fabric extending into the circle, to (hopefully) turn it into a hemisphere. Stay tuned!

A couple of months ago, I had a Greyhound pattern commission request from a lady who works with The Greyhound Supporters Of The National Capital Region (GSNCR), a not-for-profit charity that works towards facilitating adoptions for retired racing greyhounds in the Ottawa, Ontario region.

This was probably my most challenging AmiDogs design to date – how to make a greyhound that won’t fall down? They’re just so skinny! My solution was to make him a bit larger than my usual breeds (he’s about 8″ long), because there’s no way he could support his own weight on long spindly legs, plus can you imagine stuffing a long tiny 5-sc-around tube?! Even with my Detail Stuffing Tool (which I really recommend for all legs and small pieces), it’d just be too fiddly. So here’s what I came up with… 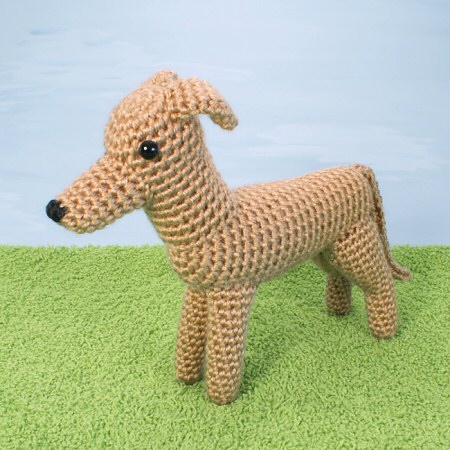 Obviously stylized, like all my AmiDogs breeds, but I hope it clearly says ‘Greyhound’ (although it could equally well be a Whippet, if you’re so inclined…) I kept it all one colour so I could concentrate on getting the shaping right without making the pattern too difficult to follow. 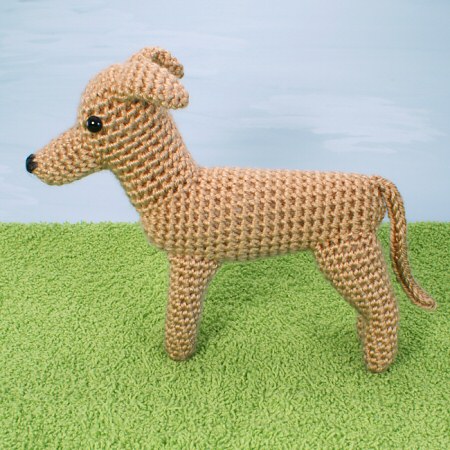 AmiDogs Greyhound takes my AmiDogs collection up to an astounding 17 different breeds – and I’m in no danger of running out of breed ideas any time soon, either… You can buy the pattern from my shop, or, as always, take advantage of the savings when you make up a custom set of any 3 AmiDogs breeds.

So, what do you think of my greyhound?

I’m guessing that not everybody knows that I run a monthly ‘Review and Win’ contest in my shop. Every review of one of my patterns or other items in the shop is automatically entered, and every month I draw a random winner who gets to pick a free pattern of their choice.

It’s really easy to write a review: just go to my shop, find the page of the item you wish to review, click the Reviews tab and click write a review.

The odds of winning are great because, for some reason, I don’t get that many reviews each month. Hint hint, please review my products! Some of my poor patterns don’t have a single review yet and feel very neglected…

And now for the October ‘Review and Win’ winner… Crystal V, with her review of my Tunisian Stripe Purse pattern (which you can see in the bottom left corner of the photo below):

I just finished making this purse and absolutely loved this pattern! I have never used the tunisian crochet technique before but learned quickly with the included instructions. My favorite part is that there is no sewing involved. 🙂

Congratulations, Crystal, I’ll email you to find out which pattern you’d like as your prize!

And I’m really happy to see that my PlanetJune Accessories patterns (pictured below) are starting to receive some reviews. 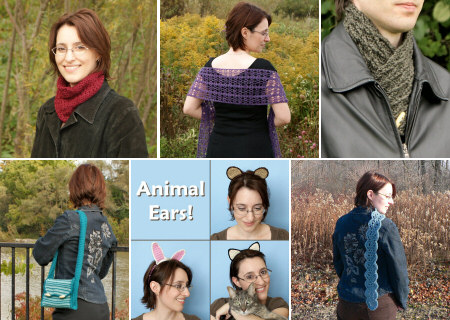 If you’d like to be entered into the November drawing to win a pattern of your choice, it’s easy! Just review any item(s) you’ve bought from me – each review in my shop gives you another entry into the contest. Thank you!