I haven’t quite finished the AquaAmi patterns yet (I need a few more photos for the instructions, so I’ll need some more daylight for that). But in the meantime, to whet your appetite even more while you wait, here’s my baby beluga whale with his mummy: 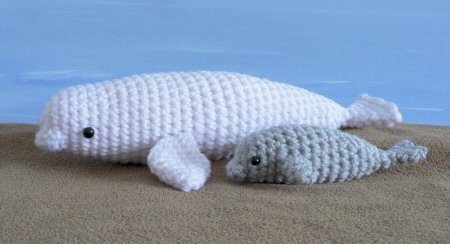 He’s turned out just as sweet as I’d hoped he would. I’m going to give his pattern away as a freebie with the big beluga whale pattern. Not long to wait now!

UPDATE: Looking for the pattern? You can find the AquaAmi Beluga Whale crochet pattern in my shop.

AquaAmi are in the works…

I staged their photoshoot this morning, complete with painted sea/sky backdrop and fabric rocks/sand. The white background I used before really did no justice at all to my white whale. I had a fun arts & crafts evening painting a bristol board with craft acrylics and making a cardboard mountain in preparation for this photo extravaganza.

I’ll show you the full results of the photoshoot on the AquaAmi Set 1 pattern release day (and if you’d like to know when that is, sign up for the mailing list and you’ll be e-mailed the very minute they are available!) but here’s a sample in the form of a much better photo of my beluga whale: 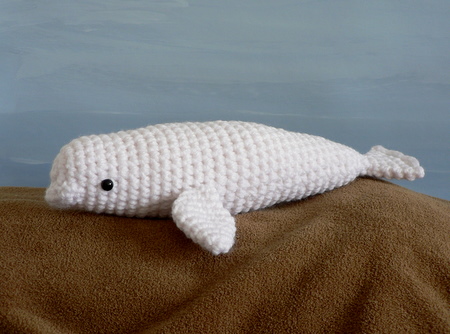 Now I’m thinking she needs a little grey whale calf by her side!

UPDATE: Looking for the pattern? You can find the AquaAmi Beluga Whale crochet pattern in my shop.

and the winners are…

Wow, what a great response to my contest! Thank you so much to all who entered – I didn’t expect to get so many fantastic suggestions. I’ve got lots more ideas now for other animals to add to this series 🙂

Now onto the result of part one of the contest: name the range. It was a difficult decision – there were so many great names! I decided in the end to not mention the sea or ocean or mammals, because this way I have the option to add freshwater animals and non-mammals. The name I decided on in the end is… AquaAmi. Short and sweet. This was suggested by several of you, but the first person to mention it was Talvi.

Part two of the contest: the random drawing. There were 92 entries, so after I removed the 5 duplicates from the drawing (and Talvi’s entry) that left 86 unique entries. The random number generator gave me the winner: Gail E.

As an extra bonus to say thanks again to everyone who entered, I have added some runner-up prizes of a discount off their next order from PlanetJune. The 10 runners-up are: Sheryl, Mandy, Eliea, Randi, Suzi.BC, Crystal, Helen, Katie F., Kiirs and Brooke.

Congratulations to all 12 winners –
UPDATE: All winners have been e-mailed!

And here’s a sneak peak of the third AquaAmi: a beluga whale. 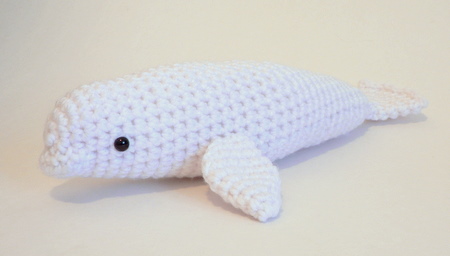 All three patterns in AquaAmi Set 1 will be released within the next week. And I don’t want to get too mushy, but thank you to all of you for your support; it means so much to me!

UPDATE: Looking for the pattern? You can find the AquaAmi Beluga Whales crochet pattern in my shop.

A while ago, I bought some glass shelves from IKEA so I can display all my toys in my craft room. We finally got around to putting them up this week: 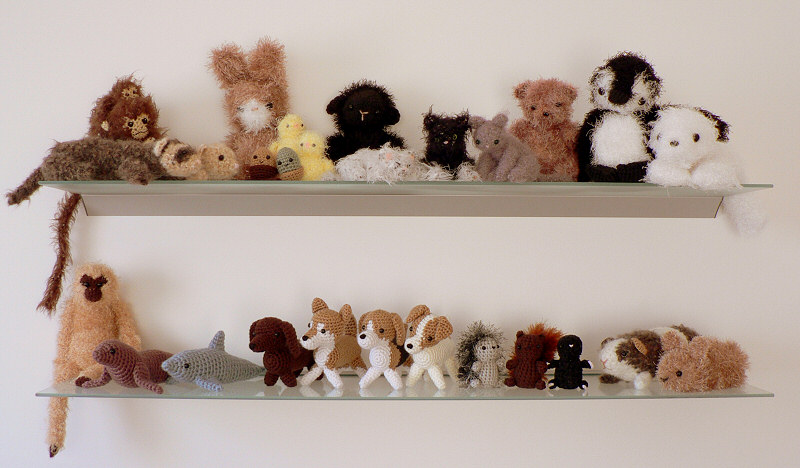 Please click for the full-size image so you can see them properly!

Don’t they look great all together like this? I just threw them up quickly, so I’m sure I’ll be doing some rearranging (and shuffling them to make more space for the new yet-to-be-born animals 😉 ).

Of course, these aren’t all the animals I’ve made. Some of them have new homes:

I’m still working on the rest of the craft room – I’ll show you more photos as I complete each area.

PS – If you haven’t entered my contest yet, it’s running for the rest of the weekend!

Here is the second design for my new pattern range (the dolphin is the first). The sea lion was more challenging to design because I wanted to crochet it in one piece, and build the curve of the neck and chest in. That’s quite a challenge using only single crochet, but I’m really happy with how it turned out. I think she looks very sweet: 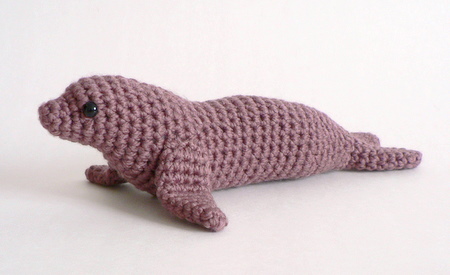 As you may have read from the dolphin post, this new range is all about water animals (but not fish) and the style is simple and sleek with just one colour per piece, to focus on the streamlined shape of these animals.

There will be two winners:

And the prizes? Each winner will receive a pattern of their choice from the PlanetJune range. Winners may either choose from one of the new range of patterns, or one of my existing Fuzzy Friends or AmiDogs patterns.

The contest will run for a week, so entries will be accepted until 7am EST on Monday January 21st 2007.

Good luck and thanks in advance for your suggestions!

UPDATE: Looking for the pattern? You can find the AquaAmi Sea Lion crochet pattern in my shop.

the start of something new

I had an idea for a new crochet pattern range: water animals. I wanted to make something different from the usual amigurumi jellyfish and octopi that everyone has been making. Here’s the first design in the upcoming range: a dolphin. 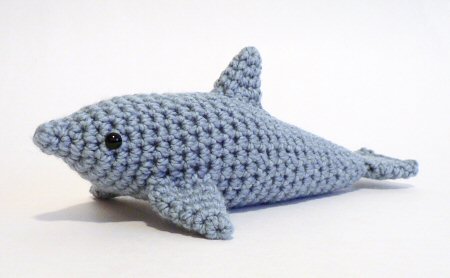 With this range, I’m going with sleek lines and single colours, so the shape is the main focus. The added bonus is that they are also quick to crochet (although not so quick to design – I have 5 rejected tails that prove that!) 🙂

I’m going to make some more water mammals to go along with him, and there will be a contest related to the new range coming soon – watch this space…

UPDATE: Looking for the pattern? You can find the AquaAmi Dolphin crochet pattern in my shop. 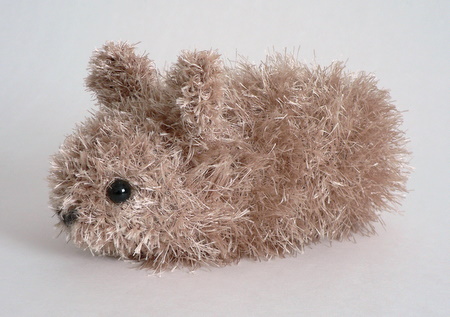 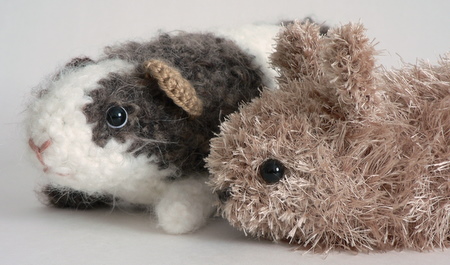 What a way to ring in the new year… Two days with much snow and no internet access wasn’t exactly what I’d expected! I’m back in action now and I’ve caught up with all the pattern orders, but I’ve still got some e-mail to sort through. To make up for my poor pictureless post yesterday, here’s a rare glimpse of PlanetJune-land:

See, I wasn’t kidding about the snow – those piles in front of the houses are probably over a metre high!

Now back to the crafts… My other blog, the Crochet Along group blog, has just started its new theme: Granny Squares. So if you’ve ever wondered how to make one, or you’d like to see what we’re making over there, head on over!

I made my first ever granny square so I could design the blog banner:

It was quick and easy to make – I’m looking forward to thinking of something to make with these squares soon. Something small though – there’s no way I’m going to have time to make a whole blanket!

I’ve enjoyed reading the crafty New Year’s resolutions on everyone’s blogs, but I’m not even going to attempt to make one of my own. I have no idea where 2008 will take me, so I’ll just continue to enjoy what I’m doing, and try new things, and see where I end up 🙂