If you saw my chameleon photoblog the other day, you’ll know I have lizards on the brain. I’ve already designed a gecko and a chameleon though, so I needed a different type of lizard to complete my lizard crochet pattern trilogy. An iguana seemed like the obvious choice, with lots of fun details to include, so that’s what I’ve made: 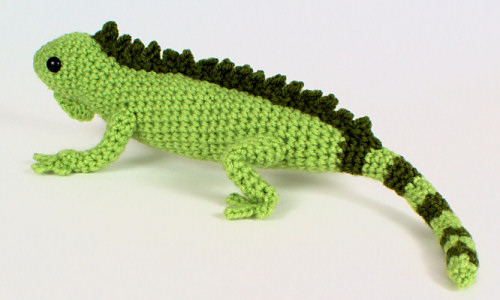 I think I struck a good balance with this design between realistic and cute, detailed and easy to crochet. He’s worked in two shades of green, although a single-coloured iguana would look nice too; you’d just lose the tail striping. He’s an incredible 15″ (38cm) long, although, don’t worry, most of that is tail – he’s only 9″ (23cm) long excluding the tail 🙂

Let’s look at that tail for a moment – it’s a perfect excuse to practice my seamless, jogless Perfect Stripes: No-Cut Join technique, although the pattern includes a standard jogless stripes technique for those who aren’t feeling adventurous and don’t mind a slight visible seam in the tail.

The realistic legs are wired with pipe cleaners, but the pattern also includes tips for omitting the pipe cleaners if you want your iguana to be baby-safe. 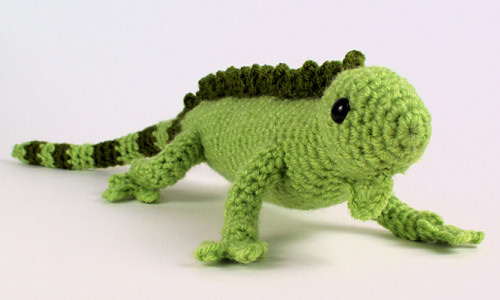 As with all my crochet patterns from now and going forward, any pieces not worked in simple amigurumi style include a stitch diagram in addition to the written instructions, so you can use whichever instructions work best for your learning style. And, as always, photos aid with every step of the assembly, so you can be confident you’ll be able to make a perfect iguana too.

I hope you’ll enjoy my latest pattern! If you’d like to jump right into iguana-making, you can pick up the Iguana amigurumi crochet pattern right now from my shop. Or, if you’re not quite ready to buy, why not favourite/queue it on Ravelry so you don’t forget about it?