I’ve been thinking about the ‘perfect’ craft world that we usually see online – endless photos of beautiful finished projects – and how they rarely, if ever, show the whole story. I’m as guilty as anyone else: unless I’m planning a tutorial, I almost never take photos until I finish a project, so you never get to see how many times I re-knit and adjust until I end up with the sweater I had in mind (or something close to it, at least).

And yet, with everything I make, whether that’s a new crochet design or a personal craft project, nothing ever goes entirely to plan! I enjoy the process of making at least as much as I enjoy the finished item, so I don’t see spending some extra time with each project as a problem. But it’s important to remember that failure is a part of learning and growing, and you shouldn’t be upset when something creative doesn’t go as expected – just learn from it and move on.

I thought I’d share a pretty hilarious example of one of my failures with you – remember this purple cardigan I finished knitting a few months ago? 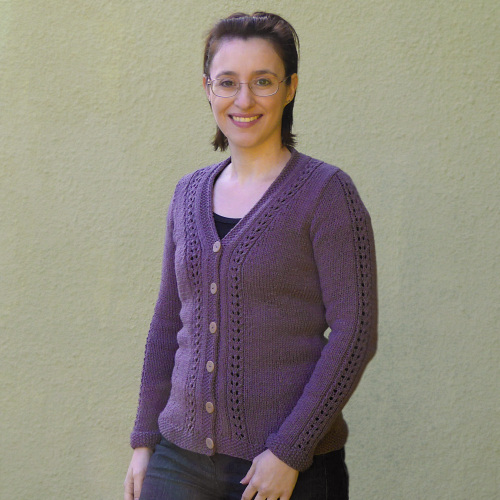 The handmade polymer clay buttons were supposed to be the finishing touch, and I spent ages perfecting a set of 8 lovely 4-hole buttons. Then I put them in the toaster oven and waited. I have no idea what happened – I’ve baked polymer clay dozens of times before, I use an oven thermometer, and I monitor the temperature regularly, so I don’t know what could have gone so badly wrong. And yet, my poor buttons grew and swelled and darkened and turned into…

After this disaster, I almost gave up and abandoned polymer clay forever, but I thought I’d have one quick last try before making such a drastic decision. I quickly cut a new set of buttons, simplified to thinner circles (one sheet of clay, straight out of the pasta machine) with just 2 holes per button, and popped them in the toaster oven. And, this time, they baked exactly as expected:

It’s hard to believe that these two buttons were made from exactly the same materials – the only differences before going in the oven were the thickness (although the ‘brownie’ buttons were much thinner before they were baked/burnt!) and the number of holes. I still don’t know what I did to make such a difference between the two batches of buttons (although I have several theories as to what may have gone wrong the first time), but, luckily, the new buttons are fine, so I just quit while I was ahead and sewed them onto my cardigan!

Failure can even be a good thing, provided you don’t let it defeat you. When it comes to my crochet designs, interesting discoveries often come from my failures in the form of techniques or shapes I can adapt for a future design…

One of my failed prototypes for my Meerkat‘s head (above, right) gave me the inspiration for what became my Aliens pattern (below)! I love my cute little alien, but that design would never have happened if I hadn’t seen the potential in the meerkat failure.

The fear of failure can be even worse when you’re trying something new. I’ve been wanting to take up painting again for a long time, and I’ve stocked up on paints, brushes, and canvases, but I’ve been too afraid of messing up to even make a start!

I think it’s time to take my own advice: it’s okay to fail. I know I won’t be any good at first – or maybe ever – but I should just paint something and see what happens, shouldn’t I?

It’s rare for anyone to show their failures, but we all have them. There’s no chance of success if you don’t even try – and then keep trying, and learning, and improving, until you end up with something you’re happy with.

Nobody is perfect, and (despite what you may think from viewing craft blogs, Pinterest boards and Instagram feeds) many projects don’t go as planned! Some things are beyond our control, but you should never let a crafting mishap stop you from having another go. 🙂