Oooh, look what just arrived yesterday: the new issue of Inside Crochet. And, hello, what’s that on p92? Yay, it’s my new Kingfisher design! 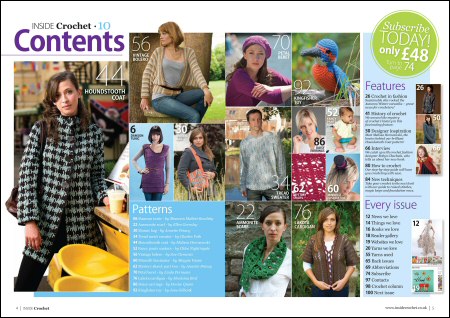 When Inside Crochet commissioned me to make a colourful design, I knew I wanted to make something British (as it’s a UK magazine, and as a salute to the lovely wildlife I left behind when I moved to Canada) and a kingfisher was the first thing that sprang to mind.

Now, if you’re American (or Canadian), you may be wondering why I made my sample kingfisher in such crazy bright colours. The Belted Kingfisher that you’ll see in North America is much larger and less colourful than the Common Kingfisher of the UK, which really is a spectacular sight! 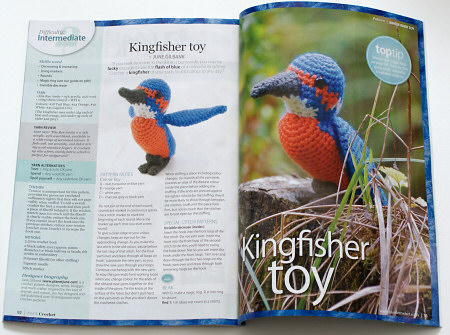 It was quite a challenge to design with all those colours and the shaping, and I’ve developed a cunning new method to make the orange/blue stripe on the body match on both sides (as amigurumi-style stitches don’t stack on top of each other, if you crocheted both sides the same way, one side would slope up and the other would slope down). Yay for new techniques and methods!

Inside Crochet Issue 10 (October 2010) is out now, and you can buy it in stores in the UK, or online. It includes a nice variety of crocheted garment patterns as well as my kingfisher! As it’s a UK magazine, it’s written in UK crochet terminology (e.g. a single crochet stitch is called a double crochet). If that worries you, I’ll be releasing my Kingfisher pattern in my standard PDF format (and standard US terms), together with my usual step-by-step assembly pics, in 6 months’ time, so you can always pick it up from my shop next spring instead!

A couple of pattern notes if you do buy Inside Crochet and want to make my kingfisher: 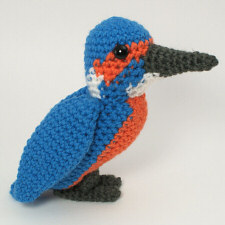 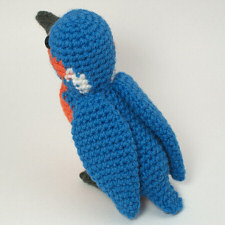