I first saw this amazing realistic giraffe pattern on Pinterest last year, but the pin was linked to an illegal pattern-sharing site, with no credit to the original designer (a pet peeve of mine). After searching through several pages of results on Google’s Search by Image – see my tutorial post for instructions! – I eventually managed to find the original Japanese page, hidden among many Russian and Italian pattern-sharing sites.

But – good news – since then, a ravelry page has popped up for the designer, Chinami Horiba, so you can see all her pretty patterns without having to navigate her Japanese site. (She has lots more of these shaped motifs as well as more traditionally-shaped doily designs.) 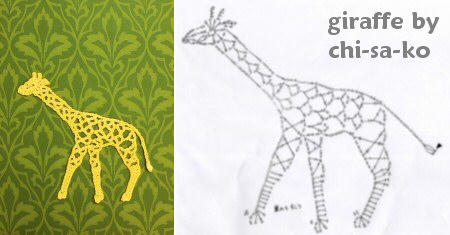 Chinami Horiba (aka chi-sa-ko)’s giraffe and chart – I’ve blurred the chart intentionally! – please visit her site for the pattern if you’d like to crochet this giraffe.

I’d never seen anything like this before! I’m not even sure what this would be called – it’s not a doily; it’s too lacy for a typical applique; it’s not a toy… (Does this technique for making lacy 2D motifs have a name? Let me know in the comments if it does, and I’ll update this post – it’d be nice to know in case anyone wants to search for more of this type of pattern.)

Even when you know hundreds of techniques, there’s always something new to learn, so I couldn’t resist grabbing some yellow yarn immediately and having a go to see how it works. Crochet charts are just magic; I followed the chart and made a perfect giraffe without needing to know a word of Japanese.

I did get a bit stuck when there was a stitch I didn’t understand: it looks like a Y-shaped treble crochet, with two tops and only one bottom. A V-shape would have been obvious, but a Y? I decided it must mean a tr with a dc worked into the side to form the second top line of the Y. It looks right, so I think that must be what was intended.

And there was one other stitch I couldn’t understand from the diagram: the bobble at the end of the tail. I decided to go with a 3 hdc bobble, but now I look again it looks more like an hdc on the right (or an arrow? maybe it’s a long pulled-up loop?), and then a 2hdc bobble. No idea what the black triangle means. (ETA: arrowheads in a chart mean ‘start’ or ‘end’.) Still, my bobble is close enough.

I crocheted my giraffe with worsted weight acrylic and an E hook (I didn’t have a more appropriate yarn to hand), so it was fairly stiff and sturdy to begin with. The bottoms of the legs wanted to curl up though, so I stiffened the finished piece with a mixture of white glue and water, pinned it to shape and let it dry. 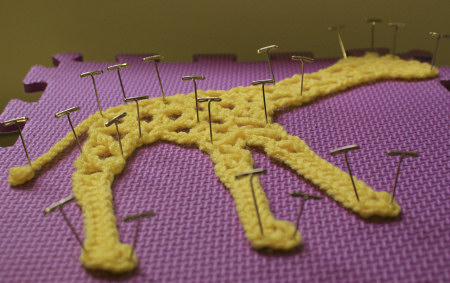 Better too many pins than too few!

And here’s the result: 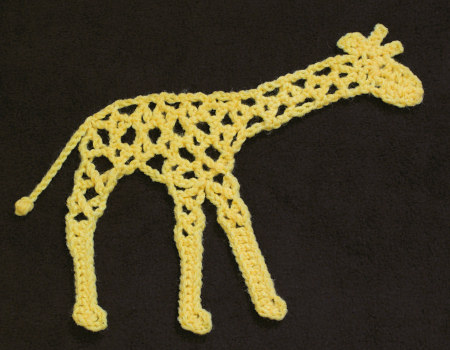 Now isn’t that clever? (btw I’m left-handed, so my giraffe faces the opposite way – the crossed tr and dtr stitches didn’t lie nicely if my giraffe faced left.)

Crochet is so versatile because there’s only ever one live stitch, so you can turn or rotate the work to any angle and insert your hook anywhere to begin the next stitch. That versatility is what allows us to easily create amazing shapes like this giraffe. Well, I say ‘easily’, but that’s when you have a charted pattern to follow – I’m sure it’s a challenge to develop patterns like this, and almost impossible to write a written pattern that clearly describes where to go next after you complete each stitch.

I’m going to try to resist that design challenge, but, who knows, I may be able to take elements of this technique to incorporate into future designs; it’s already given me some technique ideas. That’s why I always like to keep learning – you never know when something will spark new inspiration!