My sweet Maui just celebrated his 9th birthday, so it was time for me to make a new cat toy. Here’s the handsome birthday boy: 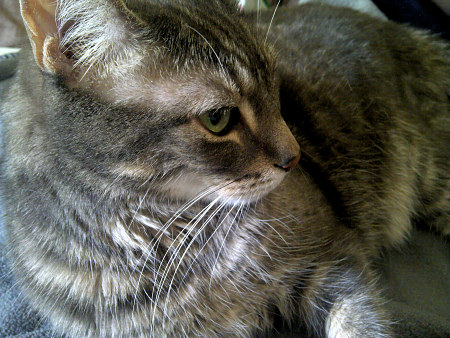 We adopted Maui from a shelter when he was a year old. He’s been our constant companion through 3 house moves and a move halfway around the world, and he’s adapted quickly to every change – if we’re with him, he’s happy (and vice versa).

Maui likes to ‘supervise’ my work by curling up next to me when I’m sitting crocheting on the sofa, and he never, ever steals my yarn – he somehow knows the difference between the crocheted balls that I make for him to maul and the ones that are going to be parts of my amigurumi designs and are not to be touched!

As he’s such a special cat, I wanted to make Maui a special toy for his birthday. The problem is that I’ve made him lots of toys before, and as he still loves the old ones, it’s getting harder to come up with different ideas. So I mixed and matched ideas from some of his other favourite toys, and enlisted my husband’s help for a quick bit of woodwork as the finishing touch.

I started with a crocheted fuzzy ball (based on my Fuzzballs pattern and a good way to use up some eyelash yarn).

I reused the same ‘interesting’ shade of yarn as that Fuzzball in the top right corner, which, despite losing its eyes and mouth many years ago, is still one of Maui’s favourite toys. 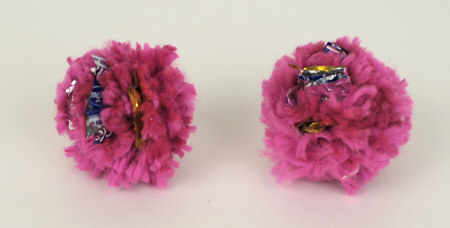 These were firm favourites for months but look a bit bedraggled now. I think it may be time to make some replacements – luckily I have a tutorial to remind me of the method 🙂

I scrunched up the chocolate wrappers to stuff inside the ball, and also added a little pouch of catnip. I tied the ball to a long string, and left some dangling lengths of eyelash yarn on the other end of the ball for extra interest. Dave cut down a length of dowel and drilled a hole in one end so I could tie the string to the pole securely. And here’s the result: 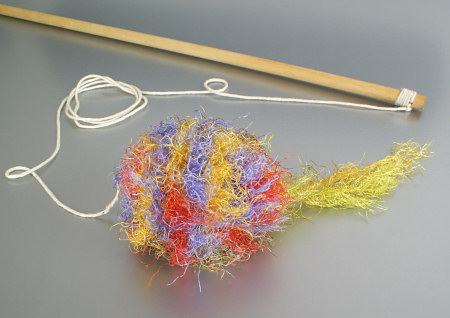 It’s a very interactive cat toy: it appeals to sight (dangling yarn tails), sound (crinkly stuffing) and smell (catnip) and brings out Maui’s hunting skills as he runs and jumps after the moving toy. Here’s proof: 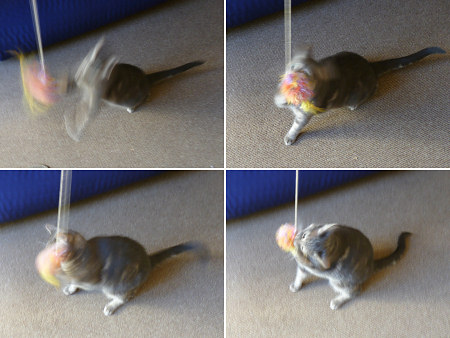 For an older or less active cat, toys on strings are really good for keeping kitty’s interest and enticing him to move, jump, and pounce. A plain ball or mouse gets boring, as it doesn’t move unless kitty moves it or you throw it for him; a ‘fishing line’ toy like this, with a string and a long handle, lets you keep the toy in motion, and your cat interested, without too much effort on your part. I’ve tied strings to toys before, but the pole makes it much easier to jerk the toy about enticingly… 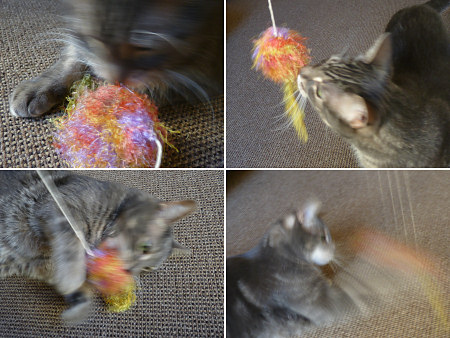 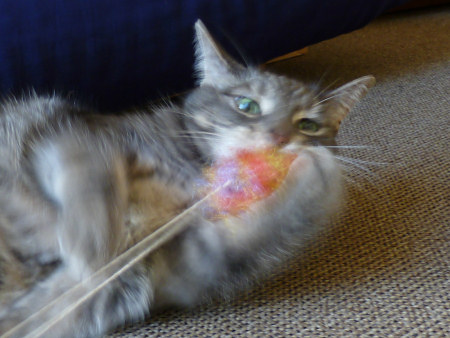