When you unravel something you’ve crocheted, the yarn looks kinked up and squashed. Re-using this yarn can leave your crocheting looking noticeably different from starting over with fresh yarn. Wouldn’t it be nice if there was a way to refresh the yarn and return it to its unused state so you don’t have to waste it or put up with the re-used appearance? Guess what: there is! 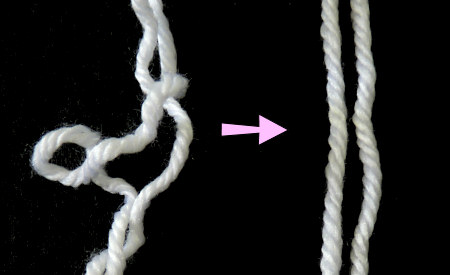 Can you turn ‘stressed’ yarn back into ‘relaxed’ yarn? Yes!

I first read about this technique at TECHknitting but I wasn’t really convinced it’d work on acrylic (although I really hoped it would), so I decided to put it to the test with the yarn recovered from one of my prototype pandas.

(You may be wondering ‘why bother?’ The nicer acrylic yarns are actually quite expensive, and, if you’re a crochet addict, the cost of yarn soon mounts up; if there’s an easy way to save money, why not take it? But, for me, the real reason is availability – now I have to import all my amigurumi acrylics from the US, they’re like gold dust to me, and I hoard every metre! Making 3 prototype pandas took a whole skein of white Red Heart Soft, and that’s not something I can easily replace. Reclaiming the yarn so I can use it to design another amigurumi would be ideal, but not if it’s going to look messy and obviously re-used.) 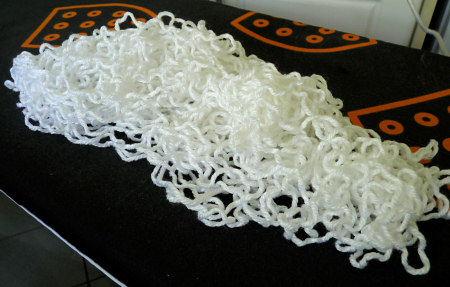 A 65m length of kinked up acrylic yarn reclaimed from a prototype panda.

You can steam yarn with a clothes steamer or ordinary steam iron, and it will magically relax, de-kinking and fluffing itself back up! And yes, as I discovered, you can even do this with acrylic yarn – you can see my results in the photos below.

Note: to reclaim an entire skein of yarn, it’s probably easier if you wind it into a hank (a large loop), soak it, and let it dry (for more details on this method, see Webs’ article: How to Recycle Yarn). But for the yarn length recovered from frogging amigurumi or other small projects, steaming is simpler and faster.

Steam-relaxing yarn really is like magic: the yarn wriggles about as it relaxes and it looks quite eerie, like a pile of snakes – watch TECHknitter’s video to see exactly what I mean – but soon the yarn will turn from a kinked tangle into strands of fluffy yarn spaghetti.

My iron doesn’t have a ‘shot of steam’ feature, so it took a fair while to steam the entire 65m pile you see above, but the method really does work. I didn’t touch the yarn at all between these two photos – this is how it moved, by itself, in reaction to the steam: 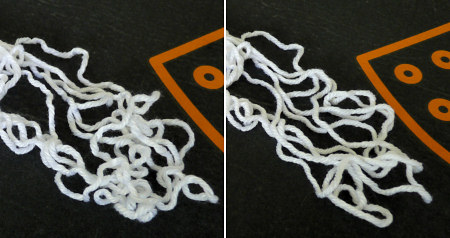 Before (left) and after (right) comparison of a small section – you can see that the yarn has de-kinked and untwisted itself. 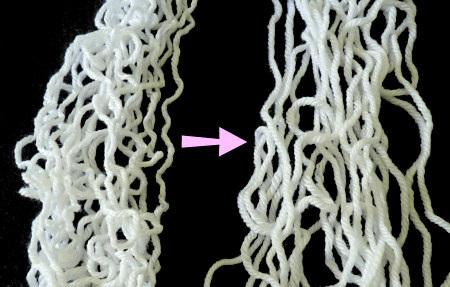 Pre-steamed (left) and post-steamed sections of my big pile of yarn.

Learn from my experience! 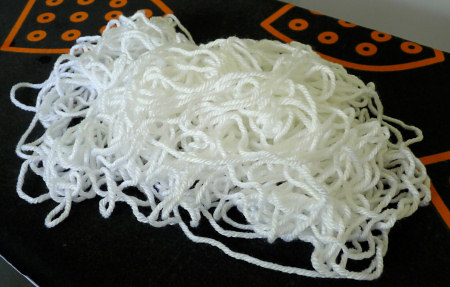 The 65m pile of yarn, post-relaxation. (Don’t leave it in a pile like I did here!)

I’m almost tempted to buy a handheld clothes steamer now, after seeing how effective this method is. And, as an added bonus, the yarn goes from feeling quite hard when it’s kinked up and squashed, to lovely and soft and bouncy again – it really does seem as good as new! 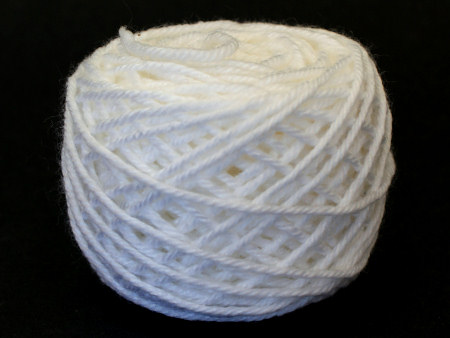 After winding it into a centre-pull ball it’s practically indistinguishable from new yarn and ready to use for another amigurumi design!

Steam-relaxing is a bit of a niche technique, but if you frog a project and want to reclaim the yarn, I highly recommend it. You’ll save money, you can re-use the yarn so it’s not wasted, and I promise you’ll have fun watching the yarn wriggle about – what’s not to like?