I’m going through a bit of a rough time at the moment, trying to sort through all my stuff to sell/donate/pack so we can make the house look uncluttered and get it on the market before we make the big move to South Africa. Although I have about 10 blog posts’ worth of tutorials and information inside my head, it’s proving difficult to find the time to actually write any of them! If anyone tells you that moving to another country (that uses a different voltage, so everything electrical will have to be sold and re-bought at the other end) is easy and non-stressful, they are lying…

But anyway. I’ve managed to squeeze in the time to make an easy Christmas craft: a Pom-pom Christmas tree! 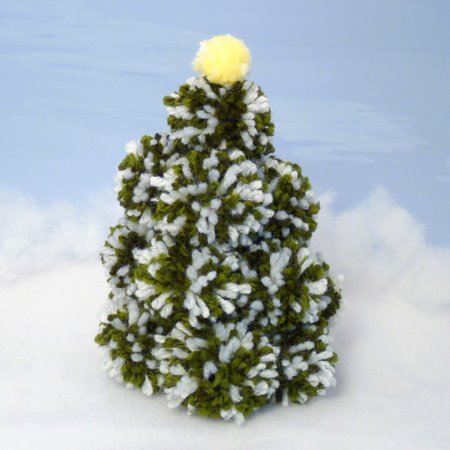 A few weeks ago, I picked up some Clover Pom-Pom Makers, for no reason at all except they look like fun and I doubt I’d be able to find them in South Africa. They are very clever, by the way: very fast and so much easier than having to pass the yarn through the centre of a ring each time! I’ll review them properly in another post when I have more time…

And now to the Pom-Pom Christmas tree tutorial:

This tutorial is Donationware – the instructions are available for free, but if you like it please consider sending me a donation to show your appreciation: 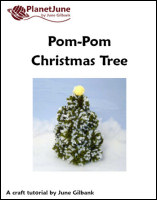 Send me a donation and receive the easy-to-print PDF version of the tutorial as a thank you!

Donations of any size are much appreciated. Just add the amount you wish to donate, and, once you have checked out and paid, your PDF will instantly be available to download from your PlanetJune account.

The complete instructions are available below, regardless of whether or not you choose to pay for them 🙂

This is a PlanetJune original tutorial. Please do not share or reproduce this tutorial; instead post a link to www.planetjune.com/pompomtree

1. Cut the card. You need to make the square into a quarter-circle by cutting off one corner as shown by the curved dotted line below. (It doesn’t have to be exact – it’ll all be hidden by the pom-poms – so you can just eyeball the curve.) 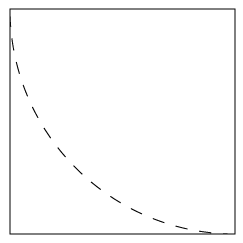 Here’s what you’ll end up with: 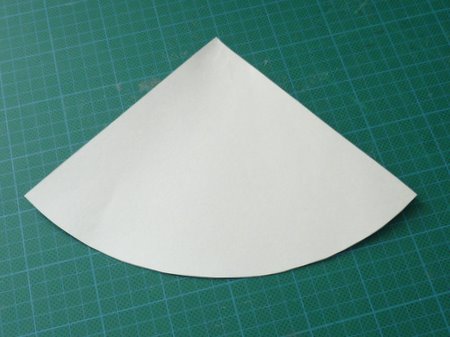 2. Bring the two straight sides together to roll the quarter-circle into a cone, so the two straight edges meet and then overlap. You see the little hole at the tip of the cone? That’s absolutely fine (in fact, we’ll use it later) so really, don’t worry about being neat with this. Tape in place. 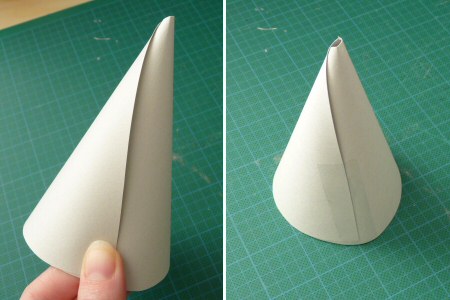 3. Make a little slit (about 1cm long) at the bottom of the cone. 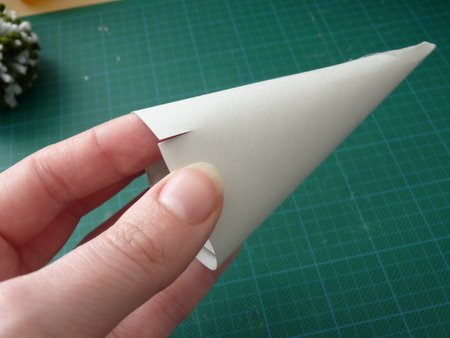 4. Make pom-poms! (use the instructions for your pom-pom maker, or one of the two alternatives I linked to in the notes above). Wind the yarn on… 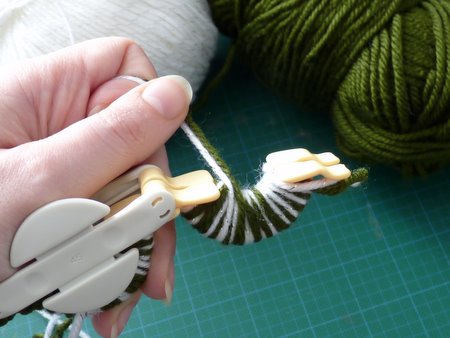 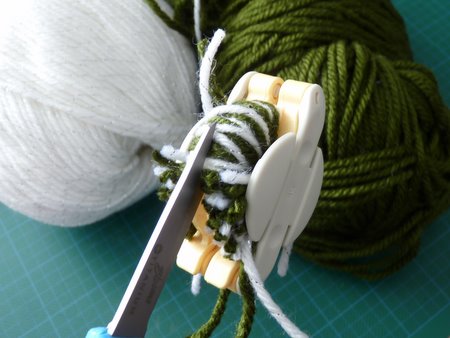 Repeat until you have as many as you think you’ll need. (I started with a dozen and ended up needing 16. The exact number will depend on the size of your cone, the size of your pom-poms, and how closely you space them. You can make more later if you find you don’t have enough, so don’t worry too much about the number at this stage.) 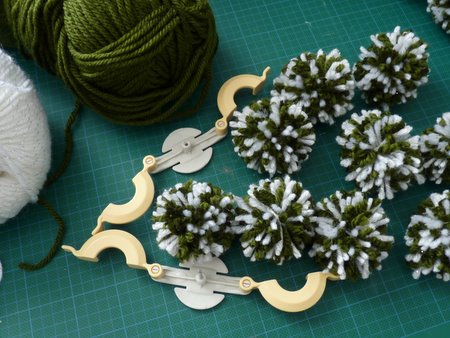 5. Cut a long length of yarn – I cut about 1m to make sure it would be long enough – and thread it onto a yarn needle. Pass the needle through the centre of each pom-pom in turn, so you end up with a long chain of pom-poms. (Don’t cut off the excess yarn yet – you may need to add more poms shortly…) 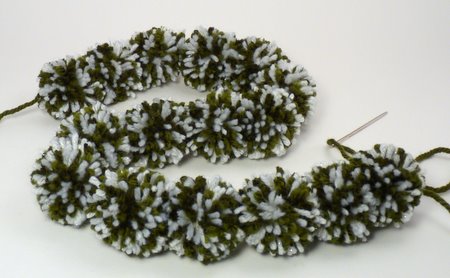 6. Tie a large knot in one end of the yarn and slide the yarn into the slit at the bottom of your cardboard cone, with the knot on the inside. 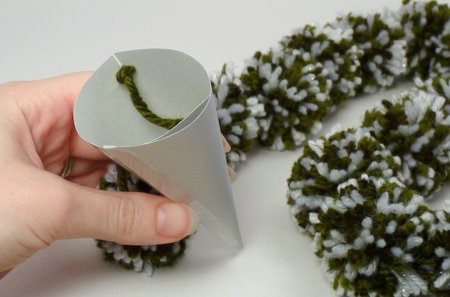 7. Slide all the pom-poms down the yarn until the first pom touches the cone and each pom touches the next. Unless you want to be making poms constantly until Christmas Eve, don’t scrunch all the poms together, as shown here (look at the bunched up poms on the right):

Each pom should instead just touch its neighbour, as shown here:

8. Now wrap the string of pom-poms around the cone in a spiral. They should cover the cone completely. You may find that you need more poms than you imagined; here, I’d only made 12: 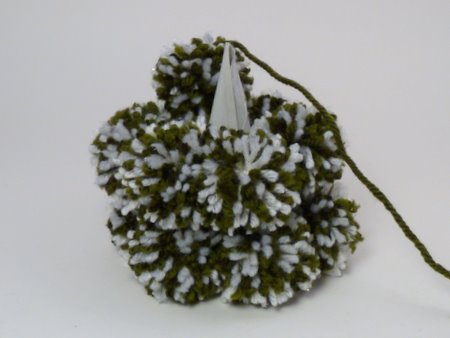 If this happens, just make more pom-poms and add them to the string. When you have enough (I used 16) the final pom-pom should sit on the top of the cone, so it’s completely covered: 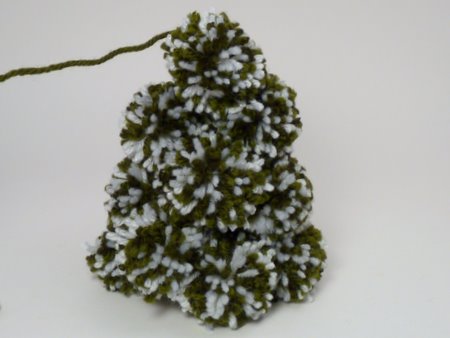 9. When you’re happy with the number and positioning of the pom-poms, carefully unwrap the string from the cone and slather the cone with craft glue. Yes, I said slather and I mean slather – the amount in the photo below is not enough! While the glue is still wet, re-wrap the pom-pom string and then give the tree a gentle hug with your hands on all sides, to help the poms adhere to the cone. It doesn’t matter if they don’t all stick as long as most of them do! 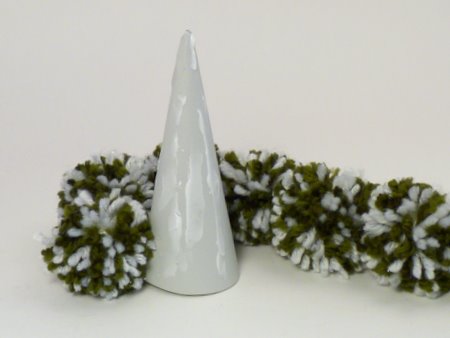 10. When the glue has dried, lift up the top pom-pom (it won’t be stuck down unless you’re a gluing genius) and drop the yarn needle through the hole in the top of the cone. 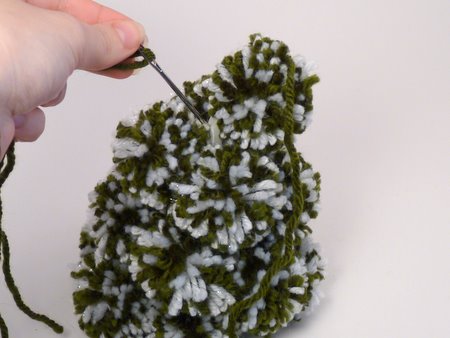 11. Pull the excess yarn down through the bottom of the cone, cut another slit in the bottom of the cone and slide the yarn into it. This will help keep the tree together. Tie a knot in the yarn, to keep the yarn from slipping out of the slit., then snip off the excess yarn. Glue the knots down to the cone if you think your tree may get knocked about by kids or pets! 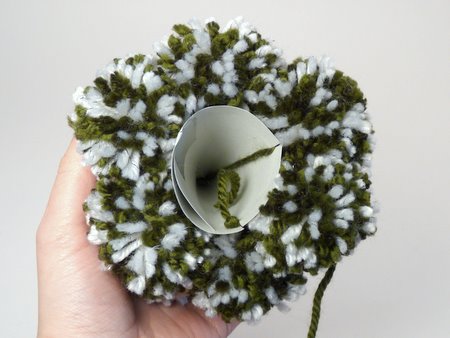 12. Decorate! In my ‘less is more’ style, I decided to just make a mini-pom (25mm) as a star for the top of the tree. You could decorate yours with bead garlands, mini-pom baubles, or anything else you want.

I hope you enjoyed this tutorial! Please leave me a comment if you did, and consider leaving me a donation. Thanks!

And if you make one, feel free to add it to the PlanetJune Tutorials flickr group 🙂