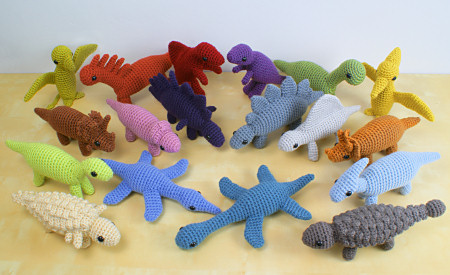 Click image to enlarge! The 9 new dinos are on the left in this picture, with the original 9 on the right.

This project has been a long time in the making; I kept getting requests for more dinosaur designs, but a lot of dinosaurs look fairly similar and I didn’t feel comfortable with the idea of changing a few parts and calling it a whole new pattern – that doesn’t seem fair to my customers! – so my Expansion Pack (EP) idea was born.

I put on my research hat and investigated all kinds of dinosaurs to find the most interesting types to add to the collection, and now I’d like to introduce them to you… 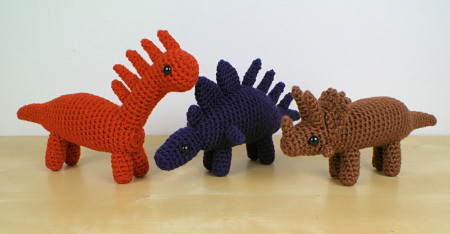 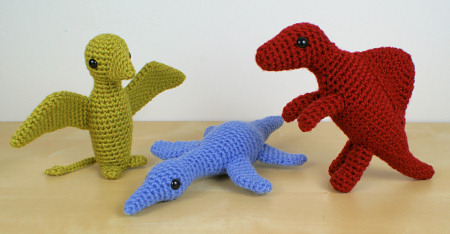 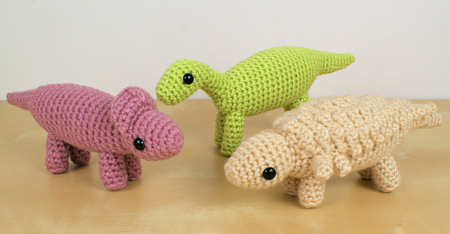 These expansion pack designs keep about half of the original pattern, and the other half is new, so I’m charging only $2.50 apiece – half the price of the original. And it gets even better if you buy a multipack set: only $6.50 for a set of 3.

The multipack EP sets correspond to Dinosaurs Sets 1, 2 and 3, so I’ve called them Dinosaurs Sets 1X, 2X and 3X to make it clear which EPs match up with which original set. And, for this launch week, you’ll only pay $6 each for any (or all!) of the three 3-pack expansion packs – a real bargain for 3 new dinosaur patterns! (No code required – the additional discounts are already set up in the shop, for this week only.) 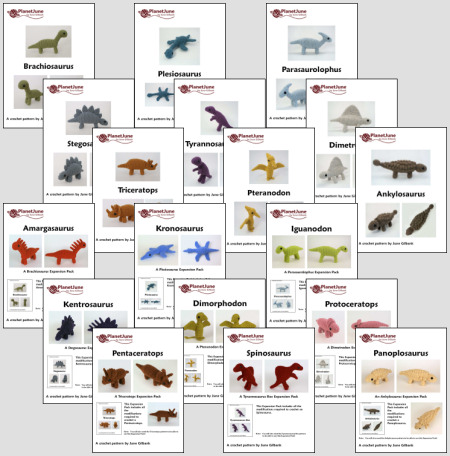 18 dinosaur patterns – all in the new and improved format!

As I moved further into designing the Expansion Packs, I realised that the dinosaur I’ve had most requests for – Velociraptor – wouldn’t be possible here: in order to make a raptor, every component of the closest pattern (T rex) would have to be rewritten, which means it’s not an EP; it’s a whole new pattern! So, although 18 dinos is already an impressive collection, if these EPs sell well, it may not be a completely crazy idea for me to design Dinosaurs Set 4 (and maybe even Set 4X?) before I call this range complete 😀

Oh, and if you’re intimidated by the thought of crocheting the thin spikes on some of the dinos, don’t worry – those will be the subject of my next video tutorial, coming later this week! And then I may just need to collapse for a little while and recover from this mammoth project…

I really hope you love my new (and improved) dinosaur collection!