Autumn has always been my favourite season, and it’s long been a goal of mine to design leaf patterns to celebrate the changing season and beautiful colours of fall. It’s taken forever to get the shape and internal structure right, but I’m so delighted with the result of my first autumn leaf designs – here’s the glorious Maple Leaf Collection! 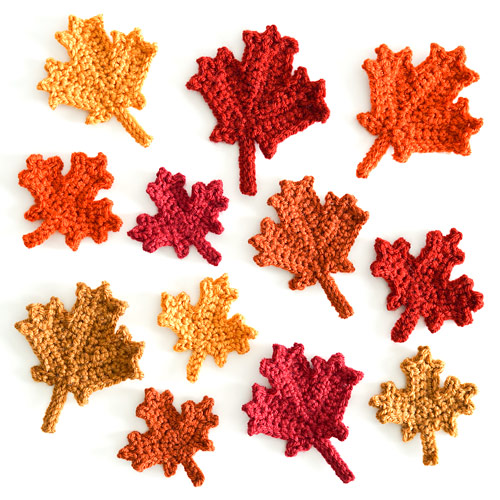 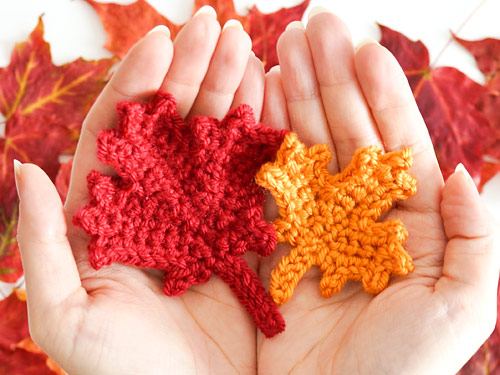 The Small leaf is fast and sweet and easy to complete: 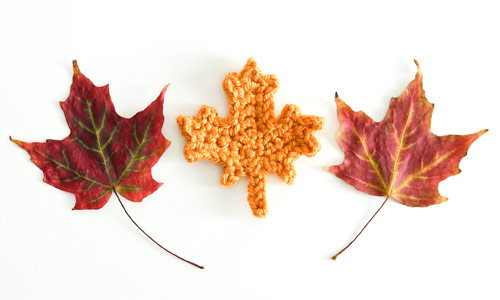 The Large leaf takes slightly longer to make but it has more clearly defined structure and angles (and it looks just like the leaf from the Canadian flag!): 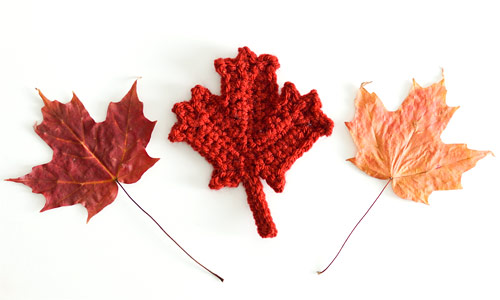 For both leaf styles, I developed techniques to give the perfect shape and structure while using only combinations of the most basic crochet stitches. The Maple Leaf Collection pattern includes: 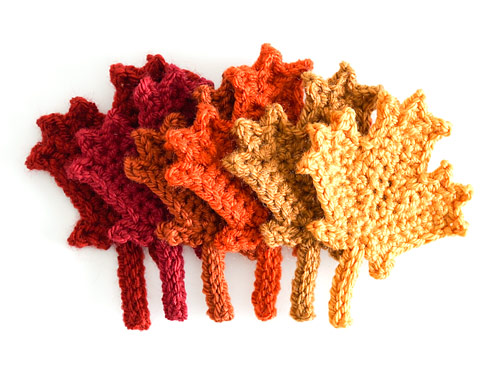 For me, maple leaves are the epitome of the changing seasons, and you can make them in any shade of red, orange, yellow, brown or green. The more different shades you make, the more realistic your leaves will look. A single leaf takes under 10 yards of yarn, so you can raid your stash and use up those scraps!

These leaves are totally addictive – once you’ve got up to speed, you’ll be able to whip up a perfectly-shaped maple leaf in minutes.

Use a single crocheted maple leaf as an appliqué on a hat or sweater, glue it onto a greetings card, add a pin back and make a maple leaf brooch. Crochet lots of leaves in a variety of colours and scatter them on your mantelpiece or Thanskgiving table, or group them together into a beautiful fall garland or wreath.

And they’re just so realistic! 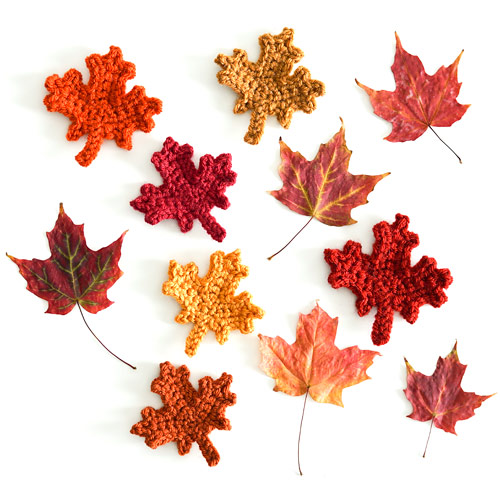 Can’t wait to get started? I don’t blame you! Click here to pick up the pattern right now 🙂

Or, if you’re not ready to get started just yet, add the Maple Leaf Collection to your Ravelry queue or favourites so you don’t forget about it: 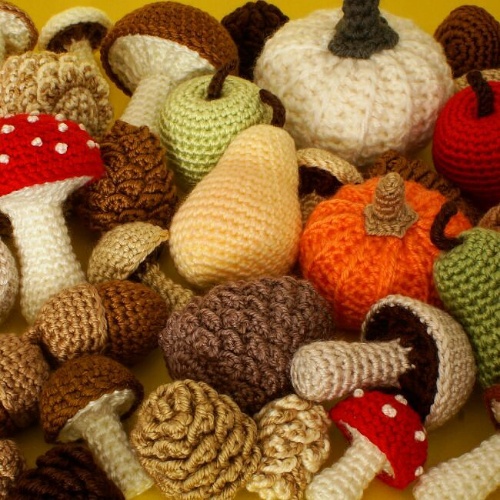 And I hope you’ll be joining us in the PlanetJune Ravelry group for our Fall CAL?

The new maple leaves will be the perfect addition to my pine cones, pumpkins, acorns, mushrooms and other Fall bounty crochet patterns, don’t you think?

I can’t wait to see the warm colours of autumn reflected in our decorative crochet this season, so please add your photos to our CAL gallery – especially your maple leaves!

I’ve been enjoying my extreme amigurumi experiments (more to come on that subject later…) but I thought, for completeness, I should also try using my massive 25mm (1 inch) crochet hook in the way it was intended!

My Chunky Elegance Rug Trio pattern was designed to be crocheted with an N US/10mm hook and two strands of bulky yarn (#5) or a single strand of super bulky (#6). How would it fare on a super-sized scale?

I decided to try to make the small rug from my pattern (above, left) – the size of the original is only 20″ (50cm) in diameter. 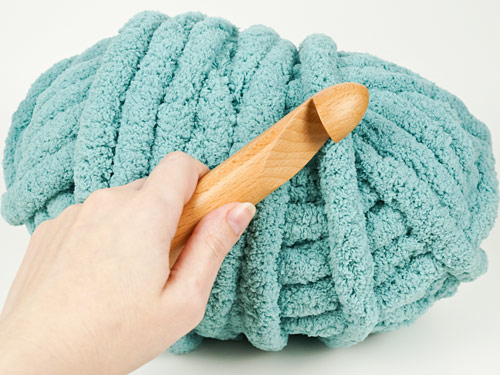 Jumbo (#7) is the recommended yarn size for a hook this large. The term “jumbo yarn” currently covers anything heavier than a super bulky, and some recommend a much smaller 19mm hook instead of my 25mm. I only had one ball of Bernat Blanket Big yarn, so I knew I wouldn’t be able to make a complete rug from it, but it’d be enough of a sample to do some calculations and see how a rug made from jumbo yarn would look…

I didn’t get too far; 300g of my jumbo yarn only works out as 32 yards (29m), and that’s not much when one double crochet stitch is 4″ tall! I’d completed Rnd 2 and got halfway through Rnd 3 when my yarn ran out, but this gave me plenty of data. 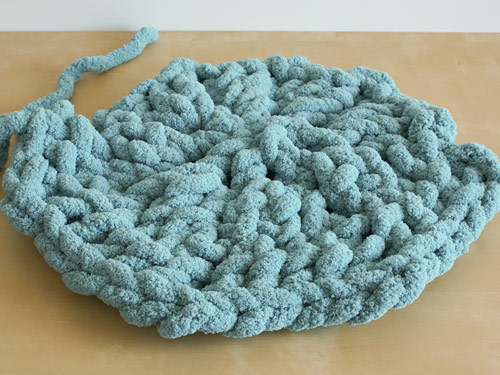 The partial rug was soft, thick and squishy – I think it’d make a lovely rug (although I suspect the chenille-style yarn would flatten down like a plush carpet does with time and use). 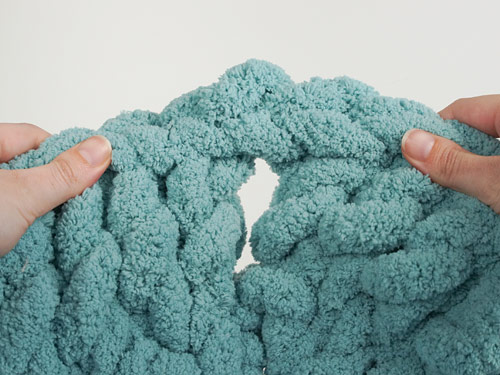 Based on my sample, completing the small rug from the trio would need 13 balls of yarn, and the finished rug would be 66″ (1.7m) diameter.

(The large rug from the same pattern would take around 40 balls of yarn and would be twice that size!) 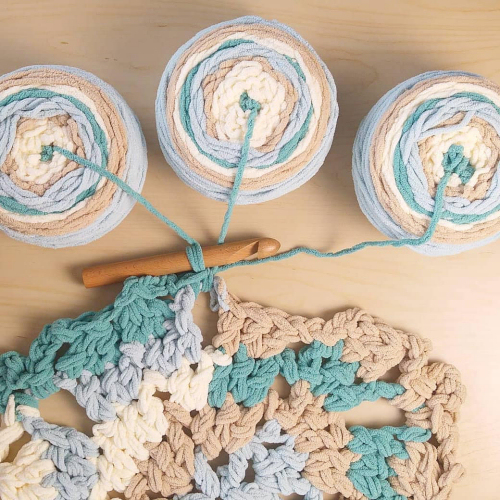 For this experiment, I tried to find 3 cakes of Bernat Blanket Stripes that all started in the same position in the colourway, so I could hold all three cakes together at once and they’d all change colour at about the same time.

I modified the first round by replacing half the double crochet stitches with chains, as cramming all those dcs into a ring with such huge yarn made a bit of a bump in the middle, and then I followed the pattern as written from Rnd 2. 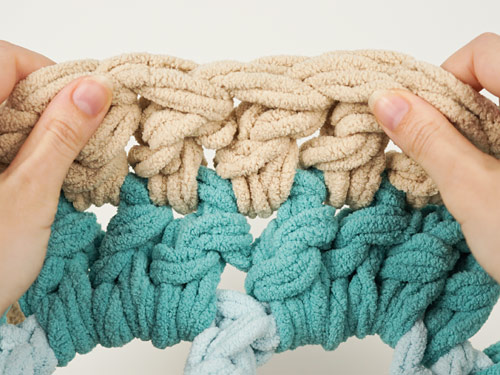 My stitches were nicely defined, and one double crochet stitch measured about 2.5″ tall – still pretty huge!

Then, after a few rounds, I could see that I had a major problem: as my yarn is much finer – compared with the hook – than intended for this pattern, my rug was starting to ruffle instead of lying flat. Disaster!

Usually, you’d fix a problem like this by switching to a smaller crochet hook, but my next largest hook was less than half the size, plus the whole point was to use my extreme hook, so I had to try something else. By pinching up the excess fabric until the rug would lie flat, I saw that I could fix the problem by restarting my rug with only 6 repeats instead of 8. Doing this does change the look of the pattern slightly, but that’s infinitely better than a rug that won’t lie flat… 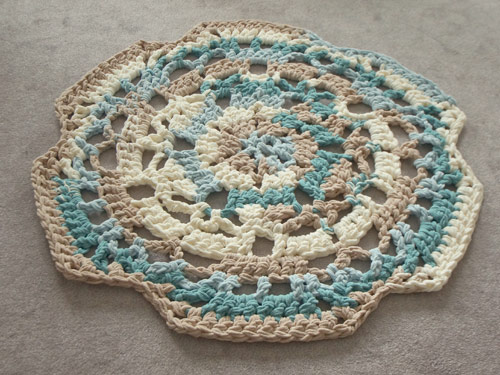 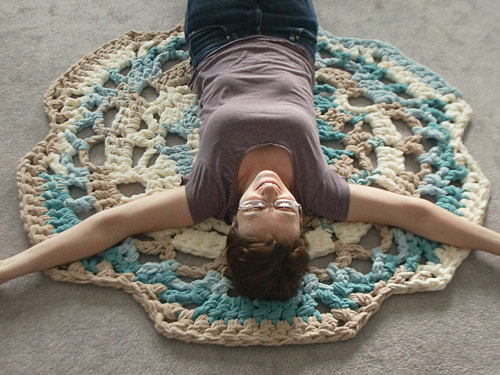 I was a bit worried that, with the variegated yarn, the colours might all pool together in clumps, but they seem to have spaced themselves out quite nicely around the rug.

It’s large enough to use as a throw over the back of my futon (and I think it looks quite good like this!) 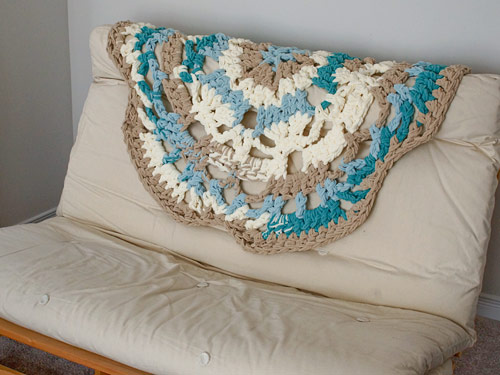 I calculated how much more yarn I’d need to continue with the pattern and make the large size rug: a total of 13 cakes of yarn (300g each), and the finished rug would weigh 3.8kg (8lbs) and measure 8ft (2.4m) in diameter! 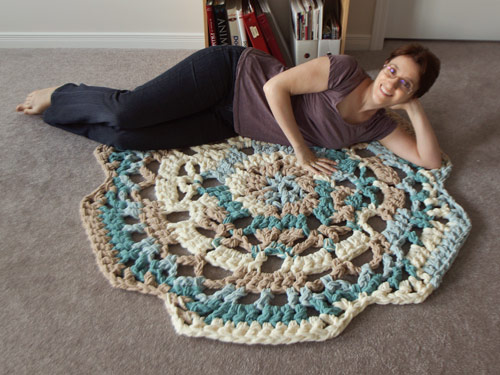 On balance, I think I’ll stick with my ‘small’ rug – it’s big enough for me 😉

I really enjoyed making this project! It works up so quickly when you use a big hook and yarn, and that’s very satisfying. Making a 4-foot rug with only 11 rounds of crochet is amazingly quick.

Wrangling the three balls of yarn was the hardest part. If you want to try extreme crochet with multiple strands of yarn, I think the key is to have plenty of space to set all your yarn out, so it doesn’t tangle, and pulling the yarn end from the centre of each ball (so they don’t roll around as you crochet). Or (probably a better idea): use the right size of yarn for your hook to begin with, so you don’t have to hold multiple strands together!

The BotaniCAL crochet-along ran from May throughout the summer, and we’ve ended up with so many gorgeous crocheted potted plants, and a few lovely flowers and fruit etc too! My cactus and succulent patterns were by far the most popular options – I’m happy to say that the succulent trend is showing no sign of fading. 🙂

All the entries are highlight-worthy, but I thought I’d share the impressive achievements of some of the most prolific CALers:

Monica (MagicalAmigurumi) made all 26 of my individual cacti and succulents – wow! (I bet making the pots got a bit boring by the end…) I hope they’re selling well for you, Monica 🙂 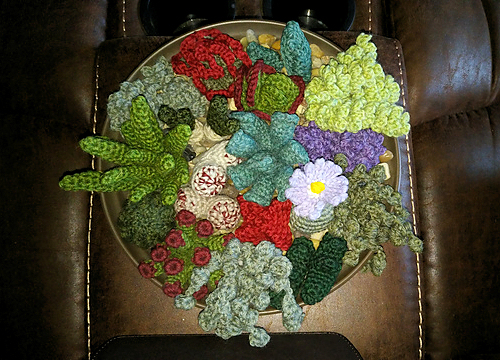 Dagrider made a massive succulent planter including all 16 succulents! Don’t they look so realistic, all together like that? 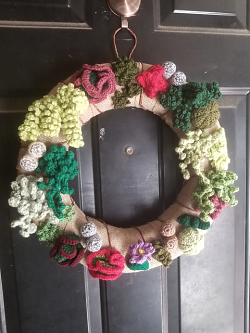 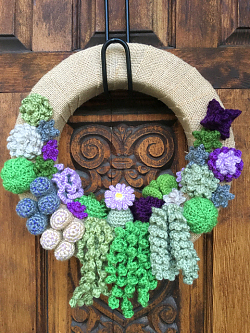 Alicia (aaBrink, left) and Susanna (sujavo, right) both made fabulous succulent wreaths. I love how they took the same concept and ended up with completely different (and equally lovely!) results, by choosing different colour palettes and arrangements for their succulents. 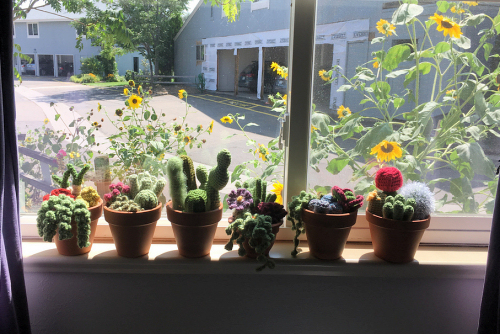 And Judy (jukatca) made all 6 cactus and succulent gardens. ‘Planted’ in real pots and sitting on her windowsill, don’t they look great? 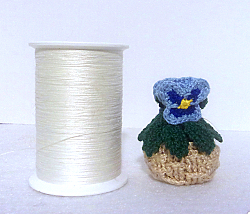 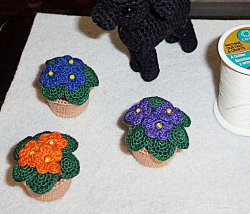 And last but not least (except in size), Michelle (MichelleBogart) loves to make miniature amigurumi with a tiny hook and crochet thread – just look at her mini Pansies and African Violets (with a spool of sewing thread for scale)! Now that’s impressive.

I’ve really enjoyed watching all the plants popping up in this CAL and seeing the creativity in terms of colours, arrangements, scale, etc – there’s obviously a lot you can do with a crocheted pot plant pattern!

BotaniCAL participants, it’s not too late to add your missing projects:

…and your project will automatically appear in the BotaniCAL gallery!

Pick up a Plant Pattern

The CAL may be over, but you can crochet your own PlanetJune potted plants whenever you want! Here are a few links:

If this looks like fun, the next PlanetJune CAL will be starting shortly and we’d love to welcome you as a participant! PlanetJune crochet-alongs are a low stress way to try PlanetJune patterns as part of our friendly encouraging online community. There are usually small and/or free pattern options if you’re short on time or money, and we’ll offer you any help and encouragement you need, no matter your crochet skill level!

Join us in the PlanetJune Ravelry group and look out for the next CAL announcement there, coming soon 🙂