Okay, I’m officially hooked on modular origami. Making the multiple units and then slotting them all together is really relaxing. I made this stellated icosahedron (thanks to Alice (futuregirl) for the idea) from 5 different patterns of origami paper.

I found this Youtube video showing how to make the Sonobe module. 30 modules later, plus some coaxing to fit them all together, and this is the result: 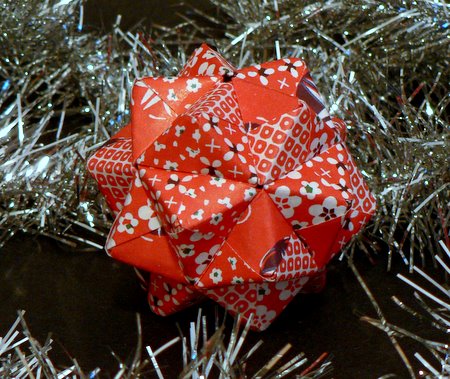 There was almost a disaster this morning as my cat decided it was a new toy for him and got hold of it before I had a chance to photograph it! Luckily the modules weren’t damaged, they had just pulled apart, so I just had to reassemble most of it before taking this shot.

Does anyone know of any other interesting modular origami shapes/tutorials I can try? Let me know in the comments!