If you like dinosaurs, you have some treats in store… June 12th will mark not only the release of the new Jurassic World dinosaur movie, but also the start of the PlanetJune Summer of Dinosaurs!

From June 12th until the end of July, we’ll be going dino-crazy in the PlanetJune Ravelry group with all 18 of my amigurumi dinosaur patterns. These patterns are always popular because they’re simple to follow (with no colour changes), work equally well in any colour you can imagine, and make lovely sturdy toys for both girls and boys of all ages. 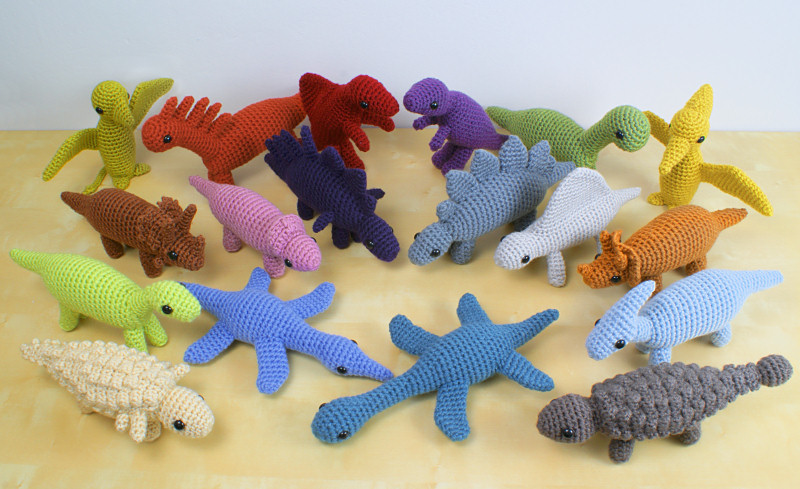 And, as if that’s not exciting enough, this will be a prize CAL…

Lion Brand have generously offered to sponsor this CAL with a yarny prize! (All the dinosaurs you see in the above photo are made from their lovely Vanna’s Choice yarn – it’s perfect for this sort of sculptural amigurumi.) I’ll also be kicking in some PlanetJune prizes, so this is going to be one CAL you won’t want to miss.

I’ll give you all the details in a post on the CAL launch date, but you can start get a head start by choosing your favourite dinosaurs and yarn colours right now (and joining the PlanetJune group on Ravelry, if you haven’t already). To be entered for the prizes, you can’t start crocheting until the official start date of June 12th, but you can pick up your patterns and yarn now, so you’ll be ready to go on the 12th!

You can find all the PlanetJune dinosaur patterns, individually and in sets, here in my shop.

While you’re waiting for the dino CAL to begin, the Plant-Along CAL continues until June 11th in the PlanetJune Ravelry group, so you still have some time to grab a PlanetJune botanical pattern and join in with making some spring flowers. 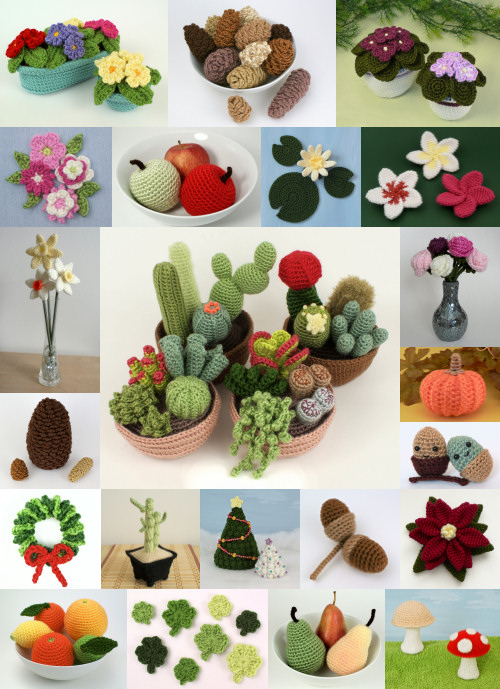 The Primroses (top left in the above photo) have been the surprise favourite this time around – and the small pot is pretty quick to whip up, so you can still make one before the end of this CAL!

You’re automatically entered in the next monthly draw every time you write a review for a PlanetJune pattern you’ve enjoyed – and you’ll also be helping future customers make an informed decision about patterns they are considering buying. 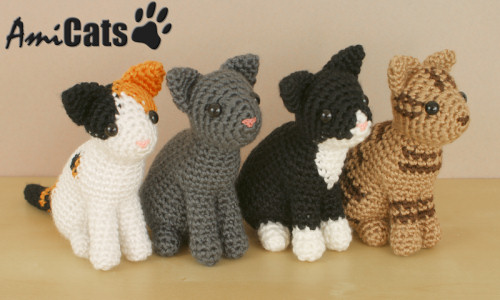 May’s winner is Jennifer B‘s review of my AmiCats Single-Coloured Cat (second from left in the above photo of the AmiCats Collection):

This pattern is so well-written and designed that anyone can make a realistic and awesome cat just by following instructions. They include positioning of body parts which allowed me to place limbs in just the right spot. The chest joins to the legs in a unique technique that creates a smooth and realistic front of the cat. The sitting cat’s body shape is so accurately cat-shaped it just astounded me. I made the first one like my sister’s first cat she had so many years ago. I plan to make remembrance cats for her of the four cats she’s had. Thank you for the best patterns ever!

Congratulations, Jennifer – I’ve emailed you to find out which pattern you’d like as your prize!

I was looking forward to telling you in this update post that my knee is really improving, but I managed to catch a bad cold and chest infection that’s kept me in bed for the whole of the past week… My knee is very sore now after returning to rehab yesterday for the first time in over a week, but, apart from that short-term setback, it’s definitely been getting stronger.

I’m very grateful to the systems I’ve built for PlanetJune that allow me to take time off to rest when I need it without having to worry about money. Setting my health as my top priority for this year has been quite a revelation: I’d usually be battling on through every illness so I wouldn’t let my customers down, and I’d end up completely exhausted. Now I’ve realised the obvious: doing that doesn’t help anyone in the long term. Taking care of myself will hopefully get me to a point where I can be much stronger and more productive, so everyone wins.

My week of rest last week has definitely paid off, and I’m all ready get back to working on my Armadillo pattern (look out for that very soon…) and preparing for our Summer of Dinosaurs. Fun times ahead!