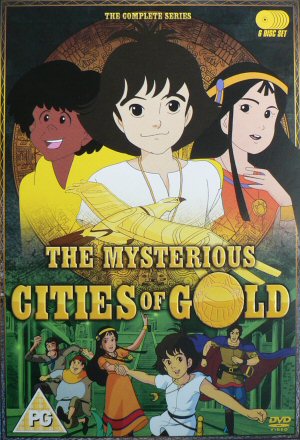 I’m in the UK this week, visiting my family, but that doesn’t mean I’m not making anything…

Mysterious Cities of Gold was one of our favourite TV shows when my sister and I were young, and we still love it now (and it’s finally been released on DVD!)

From the DVD synopsis: In the year 1532, a Spanish orphan named Esteban joins a party of Spaniards in their search for one of The Seven Cities of Gold in the New World, hoping to find his father. They are joined on their quest by Zia, an Incan girl, and Tao, the last descendant of the sunken empire of Hiva.

My sister is going to a costume party as Zia, so she asked me to make her a sun medallion for her costume. I decided to make one for myself at the same time – making two is as easy as one. We went out for supplies (a package of FIMO, gold paint, spray varnish and a leather cord) so I could try to reproduce these medallions from the series: 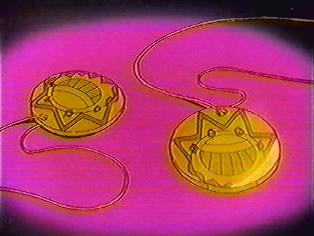 To make them, I rolled out the polymer clay and cut it into a circle shape. With the help of a Google image search, I found a picture of the medallion’s pattern, and printed it at the same size as my circle for reference. I carved the pattern with deep, wide cuts so they would show up in the finished piece, made a hole at the top for the cord, and baked it. After baking. I sanded it lightly to knock off any sharp edges, then painted it with three coats of Venetian Gold paint (making sure the paint got into all the lines of the pattern). I sealed the paint on all sides with spray varnish, and then threaded the cord through when it was all dry. And here’s the finished result: 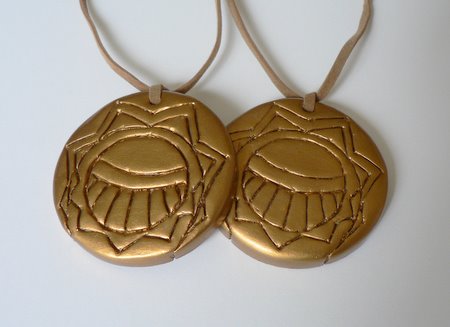