I’m so excited to launch my new product today! The Detail Stuffing Tool came about because it’s really difficult to stuff tiny things, or to get that last bit of stuffing in before you close up a hole. After making a million AmiDogs legs (that’s what it feels like, anyway!) and other tiny pieces that have to be stuffed firmly, I realised I needed a better way of doing it…

Dollmakers have a special forked metal stuffing tool, and that’s where I got the inspiration for my tool. The dollmaker’s tool costs around $15, and I wanted to produce something more affordable – if you’re anything like me, you lose tools far more often than you break them, so an inexpensive plastic tool is much more appealing! 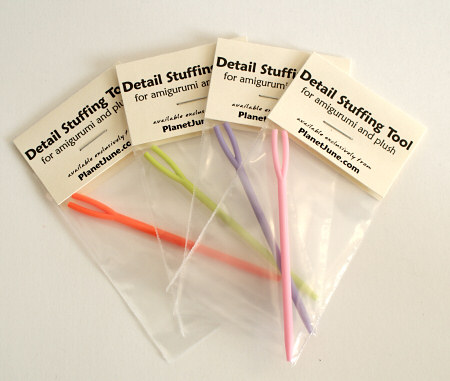 Whether you crochet, knit, or sew stuffed toys or amigurumi, you need a Detail Stuffing Tool! Not convinced? I’ve made a short video to demonstrate the benefits of the tool, and techniques for using it:

Get a grip on your stuffing: Fiberfill (especially the better quality ones) can be quite slippery, and if you try to use the end of your crochet hook or a chopstick to stuff, you’ll find that the fibres just slide around the edge of the stick, and you end up poking a hole in the stuffing instead of pushing the stuffing into the hole! The Detail Stuffing Tool has two prongs that catch the fibres of the stuffing so it can’t slip away as easily, and twisting the tool as you insert it spins the stuffing fibres into the piece with ease.

Stuff the tiniest pieces: The head of the Detail Stuffing Tool is small enough to fit inside the tiniest amigurumi part. The added bonus is that you can use it to add an extra bit of stuffing to a closed shape after you’ve finished crocheting (when you only have a 6 sc hole remaining to stitch closed) so you can stuff as firmly as you want without having to struggle to avoid catching the stuffing fibres while you crochet that last round.

Stuff right into the corners: The Detail Stuffing Tool also works really well to stuff tiny pieces for sewn plush toys. It can be really difficult to position the stuffing exactly where you want it to fill a tiny finger or arm or nose. By twirling the stuffing around the tool to make a firm blob of stuffing at the head of the tool, you can place the tool inside the tip of the piece, and then grip the stuffing from the outside as you withdraw the tool, so that the stuffing stays in place.

I’ve been using my prototype tool for a couple of months, and I couldn’t be without it now! It makes the pesky task of stuffing small pieces so much less frustrating, and I love that I can easily stuff all my pieces more firmly by adding additional stuffing into the tiny hole that remains after finishing the crocheting.

I hope you like my Detail Stuffing Tool – now available to purchase from the PlanetJune shop! I really think it’s a tool that’s been missing from the world of stuffed toymaking until now 🙂