The Halloween CAL in my Ravelry group is in full swing – I’ve never seen such a variety of pumpkins, and we’re only halfway through the month! This is going to make for a really fun roundup post 😀

I decided to join in with the CAL this time, because I’ve been meaning to try something unusual for a long time, and this is the perfect opportunity…. Meet my darling blue pumpkin (we’ll come back to the unusual colouring a bit later): 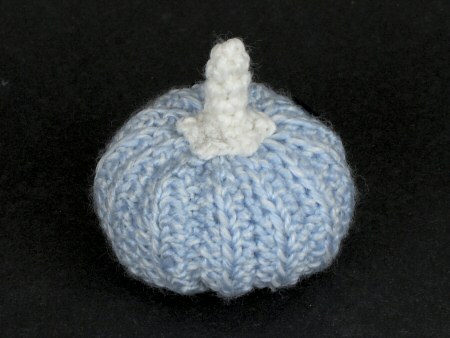 As a designer, you don’t often get to experience your own designs in the same way as anyone else does: you remember most of the pattern and how the construction works, and don’t have to follow many of the instructions to make another one. I made my Pumpkin pattern in 2008 and haven’t made one in 3 years, so it was like a completely new pattern to me; I’d completely forgotten it. To my surprise, I discovered it’s actually a really good pattern, simple but very clever – no wonder it’s so popular 😉

Anyway, back to my pumpkin: I didn’t think a spooky face would really fit his baby blue colouring, so I tried for a cute pumpkin face (I think it ended up looking a bit like a Pokemon, but I like it!) 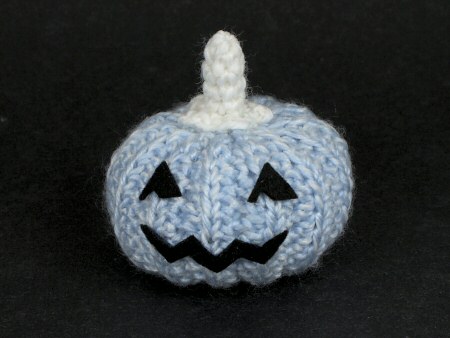 Now, why would I make such a silly-coloured pumpkin? Because this is no ordinary yarn: it’s glow in the dark yarn!

(Bernat Glow In The Dark was unfortunately discontinued a couple of years ago, and I can’t imagine why they don’t re-release it every Halloween; it’s perfect for Halloween decorations and trick or treating costumes! I was lucky enough to recognise it in the unlabelled bin at the factory outlet sale before I left Canada, and grabbed all I could find. Sadly, there was nothing in yellow, orange or green, hence the baby blue and white pumpkin.)

But this makes it totally worth the unusual daytime colouring: 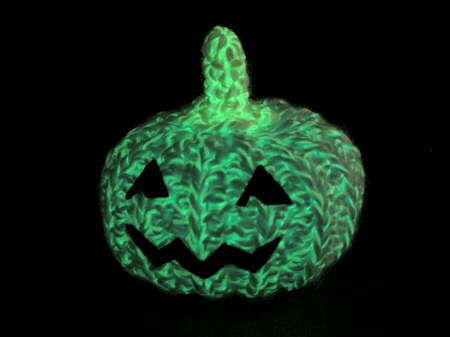 GLOWY! How cool is that?!

An aside: it’s actually very difficult to get a photo of anything glowing in the dark! I managed it in the end by setting up the camera on the tripod, focussing manually on the pumpkin, then draping blackout fabric over both the pumpkin (inside my old light box frame) and the camera before I took the shot. Before I quite perfected this technique, I ended up with this ‘ghost pumpkin’ photo: 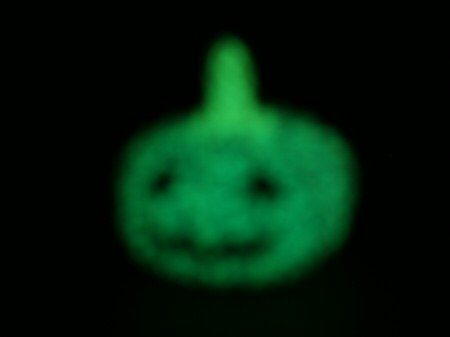 …which I think is pretty cool too!

If you’d like to join in with the Halloween CAL, it’s going strong on Ravelry and we’d all be happy to see you there! 2.5 weeks of seasonal fun to go…