A couple of weeks ago, Dave and I had the privilege of going on a behind-the-scenes tour of the Two Oceans Aquarium in Cape Town. We’ve been members of the aquarium since we moved to South Africa, as it’s not only one of the top tourist attractions in Cape Town, but also plays a valuable role in marine conservation, research and education. 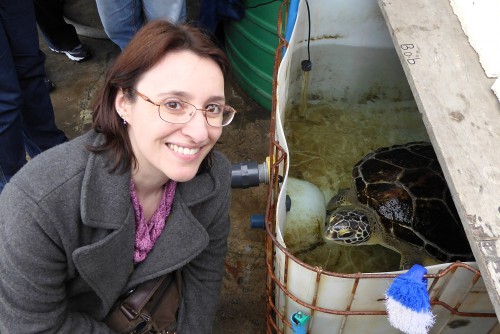 It was fascinating to see what it takes to keep a large aquarium running smoothly and regulate the conditions in each tank to keep all the animals healthy and happy! We also got to see the massive new exhibit – currently under construction – with its ambitious size and walk-through tunnel, it’s going to be spectacular when it’s complete.

But the most exciting part for me was getting to see some of the sea turtle rescue work the aquarium has been doing behind the scenes.

It’s no secret that I’m a big fan of sea turtles – designing my big AquaAmi Sea Turtle pattern wasn’t enough for me, and I added the Baby Sea Turtle Collection last year. So you may be able to imagine what a thrill it was for me to be eye to eye with Bob, a gorgeous green sea turtle. But it’s even more special when you know the story that led to this being possible…

Cape Town is located in cold ocean waters, but close to the warm Indian Ocean and the warm currents coming down from the north. Every year, many sea turtle hatchlings and a few larger turtles are swept up on Cape Town’s beaches, cold, weak, and sometimes badly injured. Without help, they couldn’t survive.

Bob, the green sea turtle I’m enjoying a special moment with in the photo below, appears to be happy, energetic, and almost ready to return to the ocean. But he’s had a harrowing journey to reach this point.

Bob the turtle was brought into the aquarium last November in terrible condition. His shell was fractured, and he couldn’t dive (hence the name ‘Bob’, as he could only bob on the surface of the water). Poor Bob developed a brain infection that caused him to go blind, and eventually it was discovered that he’d also eaten some balloons and other plastic debris – mistaking them for his jellyfish food as they floated in the sea – and the plastic had become stuck in his guts.

After many months of intensive care including a CT scan and daily tube feeding (read all about it on the aquarium’s blog), Bob’s injuries are all healing and his eyesight has returned. As you can see from my photos, he looks healthy and happy, and he should be able to be released back into the wild in due course!

It’s a very happy ending to such a horrible story, and it’s a testament to the staff and on-site vet at the aquarium whose efforts have made Bob’s recovery possible.

The Two Oceans Aquarium has rescued over 200 stranded and injured sea turtles this year alone, including many loggerheads, some greens, hawksbills, and even an olive ridley. The aquarium is the only local facility equipped to house and care for them.

All 7 species of sea turtle are endangered, so this conservation work the aquarium is doing has a critical purpose: to rehabilitate the turtle hatchlings and injured larger turtles so they can be released back into the wild in warmer waters and given a second chance at a life in the wild.

Caring for these turtles takes time and money, and I’d like to ask you to consider making a contribution to the Two Oceans Aquarium conservation fund, so the aquarium can continue to do such valuable work in ensuring that there will continue to be beautiful sea turtles swimming in our oceans in the future.

Note: The current South African economic crisis actually works in our favour here (at least something good can come out of it!) as a few dollars will go a long way here at the moment. It takes R500 to pay for the care and eventual release of a single sea turtle hatchling, but at current exchange rates, that’s only about $36 (or £24), so even a small donation will make a big difference (the minimum donation amount of R25 would cost you less than $2)!

I’d love it if you’d consider joining me in supporting this very worthy cause. Click here to send your donation – 100% of the funds will be used for conservation.

If you leave a comment to say you’ve donated, I’ll reply to thank you personally, but, either way, I, the tireless staff at the Two Oceans Aquarium, and all the baby sea turtles send you our thanks!