Today’s PlanetJune Story comes from Dr Domino Joyce, an evolutionary biologist by day and crocheter by night, who found a novel way to use amigurumi to educate children (and adults) about evolution! 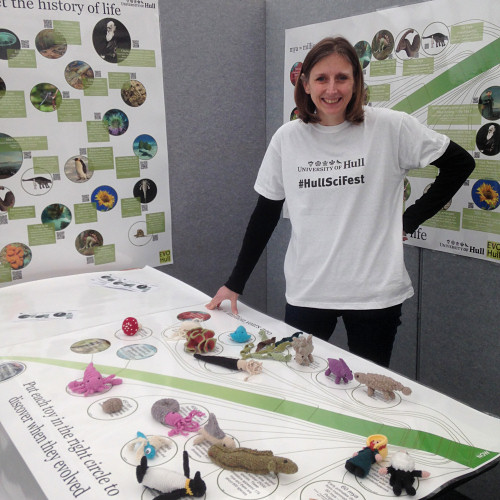 I’m an evolutionary biologist at the University of Hull, UK and I’ve wanted to learn to crochet for ages. Last year, when I was on maternity leave, I taught myself with YouTube videos, and I started making toys while my baby son slept on me. I became a little addicted to it and found some amazing patterns representing the diversity of life, but the PlanetJune site quickly became my favourite place because the animals are so much more realistic than many designs, and the patterns are amazingly clear and well designed.

Every year at Hull University, we have a Science Festival, and I began to formulate a way to combine science communication with my new crochet addiction. I thought I would make a poster containing a timeline of the history of earth, and use the toys to illustrate when particular things evolved. The PlanetJune dinosaur sets proved particularly inspiring for this!

I made a tabletop timeline poster, as well as backdrop posters with links to the patterns, and have made these available (here) for anyone who wants to download and print their own.

The key message I wanted to get across is that evolution has taken place over a timescale so long, it is hard to visualise. The earth is 4.5 billion years old, but most of the life we know about and see today evolved ‘only’ in the last 540 million years or so. There was a very long period of time when not much happened at all! 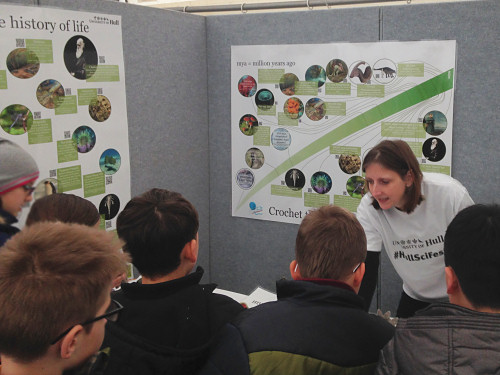 This weekend (after a lot of crocheting) the festival took place. It was a big success – we were expecting about 1500-2000 visitors, but received almost 5000. I asked the children who visited my stand to place the crochet dinosaurs on the timeline where they thought they should go, and nearly all of them put them right at the beginning of the line, and were amazed when I told them the correct place was much closer to “NOW” than they thought. 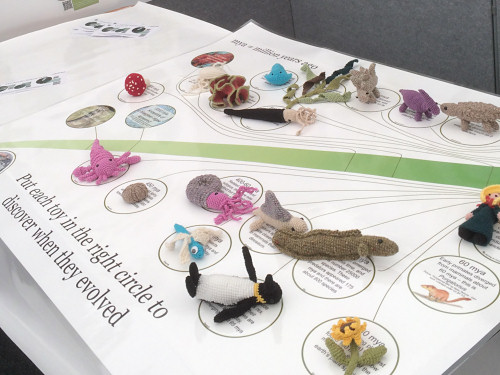 I was able to talk them through the history of (some!) life using the various organisms I had made, including a crochet Mary Anning and Charles Darwin representing Homo sapiens. My favourite part used the Emperor Penguin to convey the idea that birds are simply dinosaurs that survived and carried on evolving. 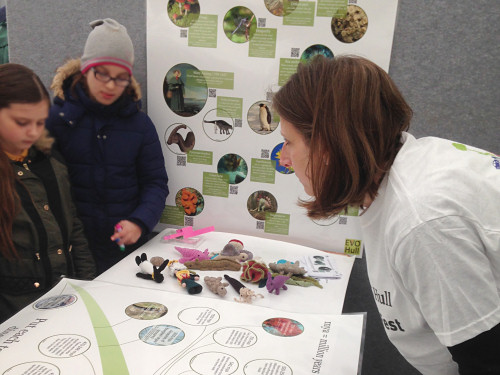 The toys worked really well to draw children and adults in to the stand to find out what it was about, and I think I convinced a few of the adults they should try crocheting, as well as inspiring a few who already crochet to try some of these patterns!

But most of all, I hope I helped both children and adults to understand the history of life on earth a little more clearly.

Based on your account and photos, I’m sure you accomplished that mission, Domino! Congratulations on such a successful event, and for coming up with such a great idea for a fun, interactive learning experience.

One of the things that makes me really proud as a designer of realistic animal and plant patterns is when professional scientists who study the organisms I reproduce in crochet are fans of my work – it’s high praise indeed whenever I hear from botanists, paleontologists, marine biologists (and now evolutionary biologists!) etc who appreciate my designs. And I’m so happy that my patterns could play a part in Domino’s Science Festival exhibit – it’s lovely to think that, even though I’m no longer working in the field of science, I’m still helping in some small way to educate the scientists of the future.

Thank you so much, Domino, for sharing your story with us today 🙂
Please leave Domino a comment if you’ve enjoyed this post!

PS – If you’re feeling inspired to crochet some PlanetJune dinosaurs and penguins too, you can find all the patterns in my shop: