inspiration/influence vs copying: drawing the line

This isn’t the post I wanted to write today, but thanks to recent events, I’d like to discuss the difference between inspiration/influence and copying when creating designs (I’m talking specifically about my crochet patterns, but the same applies to any designer in any field, whether they produce patterns or sell finished items based on their designs).

Many times in my almost 5 years as an amigurumi designer, I’ve experienced other ‘designers’ copying my designs and selling the resulting patterns. I’m not talking about the outright theft where a person buys a pattern, copies it, and then sells it as their own work: my experience is a less obvious, less tangible theft, where people look at my photos and replicate my design without ever having seen the pattern.

For those designers, I’m giving you the benefit of the doubt by assuming that you may not yet realise you’ve done anything wrong, and I hope that this blog post will help to clarify the distinction between inspiration/influence (acceptable) and copying (not acceptable).

To start, I’ll talk you through the design process of one of my most distinctive designs: my Pteranodon (a type of Pterosaur). I spent many hours doing research before I could begin to create my design:
(Image attribution: all images below are links to the sites I found them on.) 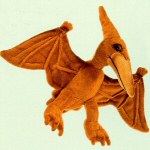 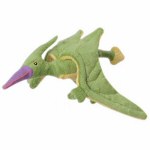 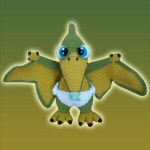 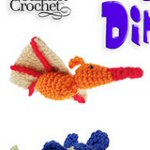 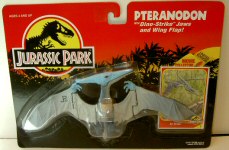 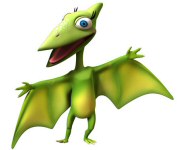 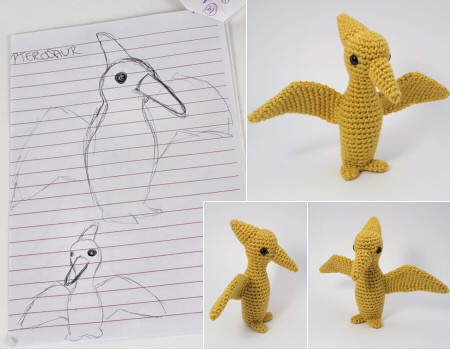 Finally, after going through all those steps, I could pick up my crochet hook and begin to crochet my sample and to create my pattern. As you can see from my sketch (sorry about the quality, it was never intended for anyone other than me to see!), 90% of the design was created before I ever picked up a hook – I just refined the proportions while I was crocheting to make it more elegant.

Two Scenarios (Designers A and B)

Now, let’s say that a couple of fellow designers (for the sake of simplicity in writing I’ll assume both are female) see my dinosaur patterns and are inspired to create their own.
Is this acceptable? YES, of course. I am not the first person to crochet a dinosaur, and I wouldn’t want to be the last.

Designer A does some research of her own and creates her own interpretation of a Pterosaur in her own design style. Maybe it’s crocheted in more than one colour; maybe it has an open beak; maybe it has legs; maybe its proportions are more realistic (or more cute’n’cuddly) than mine; maybe it has embroidered detail or crocheted textures; maybe it has felt accessories glued on; maybe it has big cartoon eyes, or any of a million other differences that make it her own design. Yes, it’s a Pterosaur, but it’s clearly a ‘Designer A Pterosaur’ – it fits in with the style of her other designs, and naturally any resemblance to mine will be based on the fact that we both used a real animal as our inspiration. Designer A decides to sell her Pterosaur pattern.
Is this acceptable? YES, unquestionably. I’m happy if I can inspire another designer in this way.

Designer B looks at my Pterosaur, figures out what crochet shapes and stitches she would need to replicate it, and makes a close copy of her own.
Is this acceptable? Let’s say MAYBE. I’m not thrilled, but if people have the talent to replicate my work without purchasing my pattern, for their own personal use, I can’t stop them. It happens. I’ll survive. Those people would never have bought my pattern anyway, so I’m not out of any money as a result.

Designer B now decides to sell the pattern for ‘her’ Pterosaur.
Is this acceptable? NO, absolutely not.

What’s the distinction between A and B selling their pattern? Let me explain:

I’d like to make it clear that although events of this week have precipitated this post (and thank you to everyone who notified me of the copying in question), my intent is not to single out any one person – I’ve experienced copycats for years now, but I’m intentionally not showing any specific examples. It is possible that some cases of ‘Designer B’ that I have experienced are purely coincidental, but the more identical design elements that exist between the two patterns, the less likely it is that we reached the same point independently.

Recreating an existing design serves only one person: the person who has recreated it. Pattern buyers gain nothing from the addition of a second copy of the design, and the original designer only loses by the existence of the copy. If you’re looking to build a career (or even a hobby business), then getting yourself known as a copycat is not the best long-term strategy.

If you instead put the effort into creating your own style and your own original designs, you can build a loyal following and, in time, become known and respected as an artist and a designer. It’s not the easiest path, but it is, ultimately, the most rewarding.