This is the fifth post in my monthly series on the fascinating nature I encounter here in South Africa.

In our mission to look for more whales (you may remember we spotted a whale’s tail last month!), we decided to take a day trip to Hermanus, a small coastal town 120km east of Cape Town, and supposedly the best place for land-based whale-watching in the world.

En route, we stopped at Stony Point, which is home to one of the only three land-based penguin colonies in South Africa. It’s a natural colony of wild penguins, but it has been fenced in to protect the penguins from leopard attacks, and there’s a boardwalk so that the clumsy humans don’t stomp on the penguin nests. 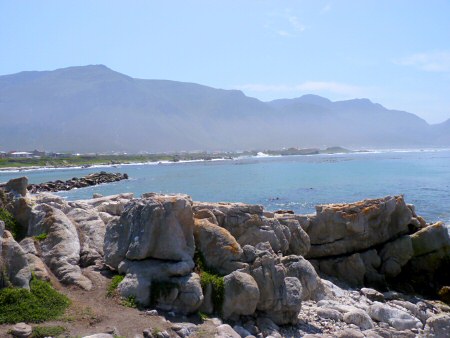 (I’ll put a jump in here – this is a long post so feel free to skip the rest if you’ve just come for the crafts and don’t like nature!)

Before we even got to see any penguins, we spotted a dassie (a treat for me because I’ve been waiting to spot one since we first moved here). Their proper name is rock hyrax – dassie is their South African name – and, although they look a bit like guinea pigs or groundhogs, hyrax aren’t rodents: their closest living relatives are actually elephants and manatees, believe it or not! 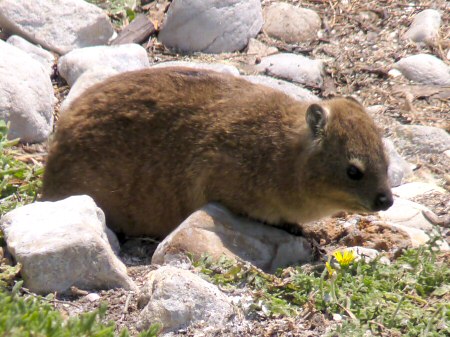 Dassies are well adapted to living on rocks and mountains; their feet have rubbery pads with sweat glands so they can grip and climb steep rock surfaces. This one, however, preferred to roll around on his back and eat all the yellow flowers in sight 🙂 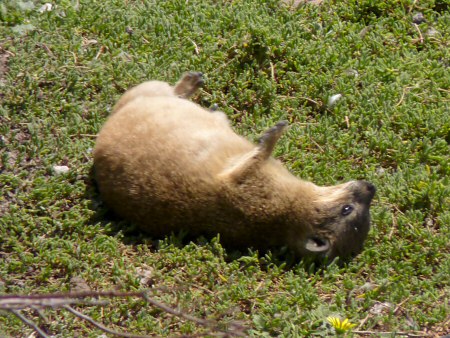 We turned around, and there they were: penguins! 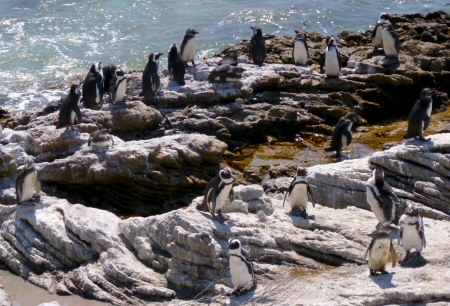 These are African Penguins, also known as Jackass Penguins. I can confirm that their call sounds exactly like a donkey braying – it’s hilarious! 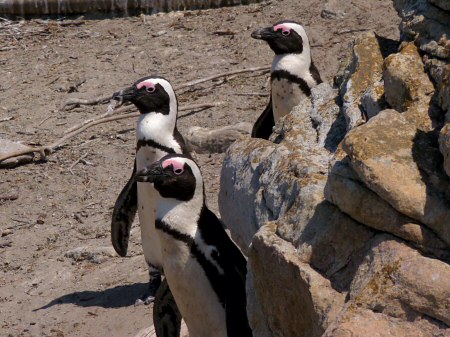 I’m sure you’ve seen penguins in zoos and aquaria, but it is nothing like seeing penguins in the wild. 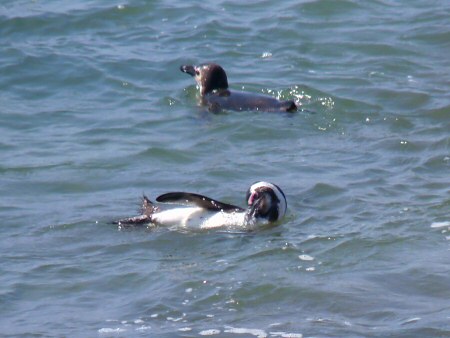 They swim and preen in the sea… 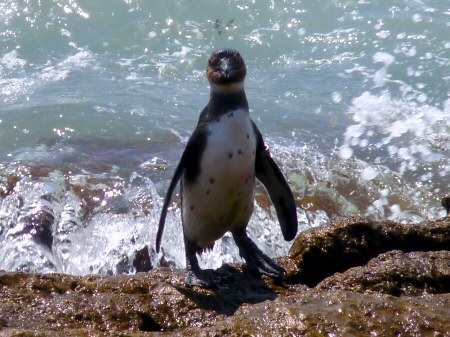 …then they hop onto the rocks and jump and waddle back to the colony. 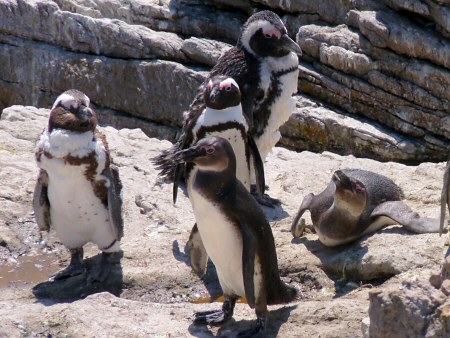 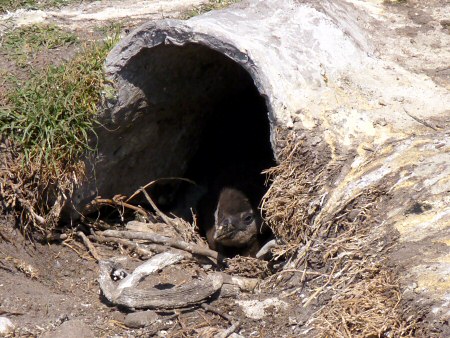 …and little fluffy brown penguins in their nests/burrows.

There were hundreds of penguins! And they leave the sweetest tracks in the sand: 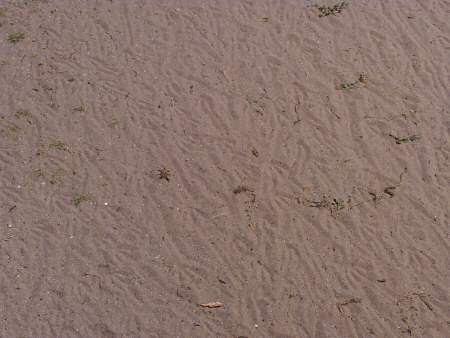 Stony Point is also home to a massive colony of cormorants: 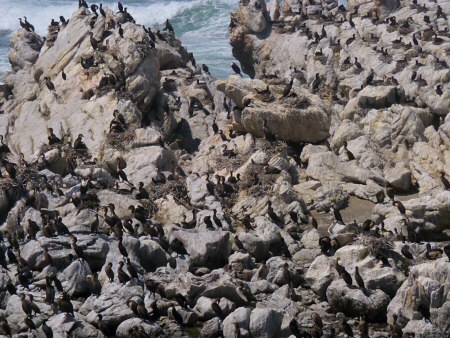 The weather was hot and sunny, and, after a while, we started to notice lizards sunning themselves on the rocks: 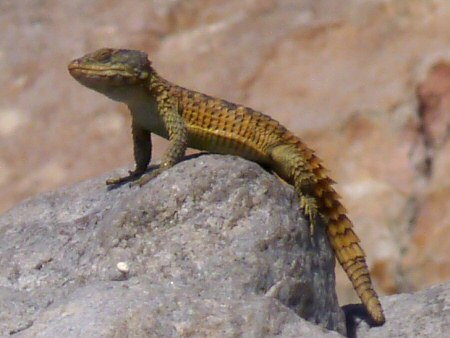 These (above and below) are Cape Girdled Lizards. They are about 6″ long. Look at their spiky tails! 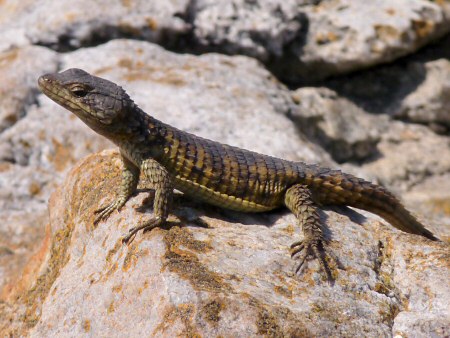 And these (below) are Southern Rock Agamas (about 9″ long). The male looks amazing and chameleon-like with his bright blue head, but the female is so drab you can hardly see her. (She’s facing down in this pic, with her tail sticking up behind the male.) 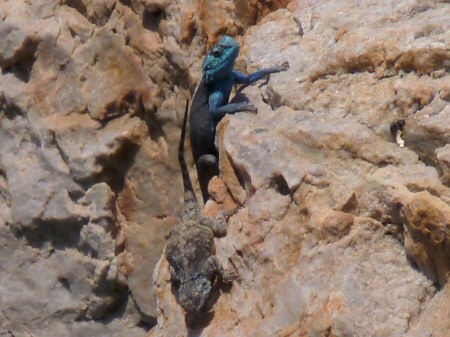 For all his size and colouring, the Agama was totally intimidated by the Girdled Lizard, who kept chasing him away! They were lightning fast but I did manage to grab a pic for you: 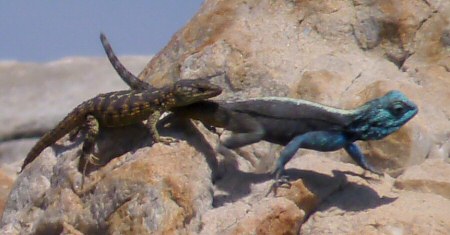 What an amazing day! And then we remembered we hadn’t even got to the reason for our adventure: whale-spotting! On to Hermanus… 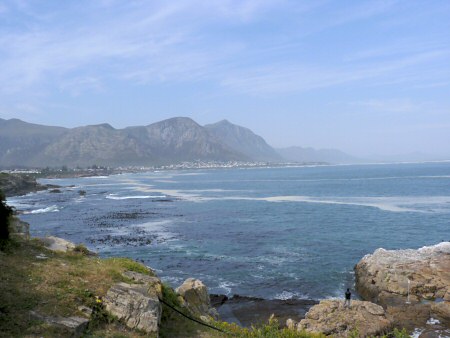 Yes, it was beautiful. We found a patch of grass to sit on, and prepared for a long wait, but we spotted our first whale within minutes! We watched for about an hour and saw at least 8, and probably more, whales. It’s hard to tell exactly how many we saw, because they stay mostly submerged and you may be looking at the fins of two whales, or a fin and a tail of one… And we think they were all Southern Right Whales, but, again, it’s hard to be sure when all you see is a bit of black sticking up out of the water – there could have been a migrating Humpback in there too. Southern Right whales are distinguishable by big white callosities (rough patches) on their heads.

I really can’t convey the experience through these pictures, but seeing these giant mammals in the sea, swimming and playing and jumping, is, literally, awesome. At least the photos are proof that we really saw them! 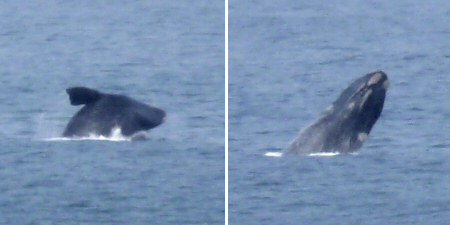 L: fin, R: head (this one kept jumping up out of the water!) 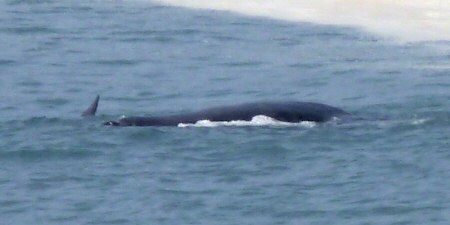 a tail and a head – must be two whales (or one very limber whale!) 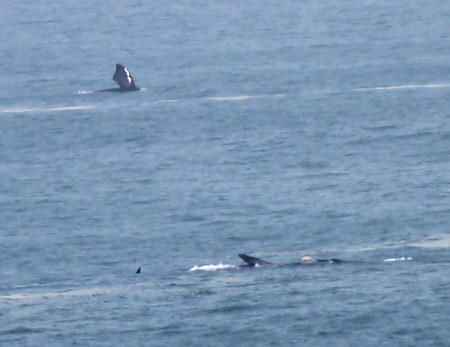 a big raised flipper at the back, and at least one whale at the front

Whales, penguins, blue-headed lizards, rock-climbing furry elephant relatives – I can hardly believe we saw all of this in one long, tiring, magical day. I hope you enjoyed my photos! Please leave me a comment if you did…