or, Think Carefully Before Modifying a Pattern

With the cold Canadian winter approaching, I thought it was about time I tried crocheting another wearable. I thought the Tweedle Dee Jacket (Crochet World magazine, August 2008) would be easy, but I just can’t stop myself from making modifications to anything I make…

This is the only pic I can find of the original jacket – sorry it’s not more representative! I googled and checked on ravelry, but it looks like I may be the only person in the world using this pattern…

I didn’t like the length of the jacket or sleeves (waist length and awkward-looking 7/8 sleeves – all too short) but I figured it would be easy enough to add a few rows to get the length right for me. I decided to modify the pattern as I go, to (hopefully) end up with a good fit.

I also substituted Bernat Softee Chunky Twists for the titular Tweedle Dee yarn. It’s a similar weight, softer, washable, and 1/3 of the price. I couldn’t quite get gauge without going up to an N hook, which produced a really holey, open fabric that I didn’t like, so I stuck with an L hook and prepared to fudge the numbers a bit for fit.

I crocheted the back and one side of the front, lengthening the bottom of each by 3″. The sleeve instructions gave me a hugely wide sleeve, so I threw out the pattern and improvised, using a shop-bought sweater as a guide to the sleeve width I needed. I tried stitching all the pieces together for fit, and I saw that the armhole was now 3″ too deep for my fitted sleeve. So I unravelled the top 1/3 of the front and back pieces and made the bottom of the armhole 3″ higher. (Have you spotted my mistake yet? No? Neither had I…)

Now happy with the way the sleeve fitted into the sleeve opening, I crocheted the other front piece and the second sleeve. I sewed it all together, crocheted on the collar, added the edging, wove in all the ends (I was on a roll), and tried it on: 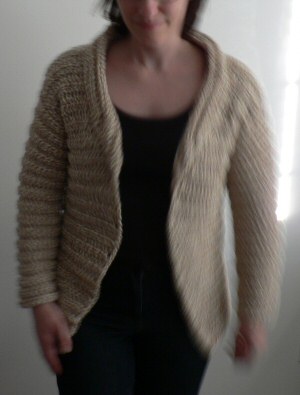 Oh. Somehow it was very very long and all stretched out over my hips – a horrible length for a pear-shape like me. It was about 3″ too long… Does that number sound familiar? Yes, only now did I see the mistake. Now, when it’s all finished apart from the buttons. *sigh*

I had added the extra length I wanted to the measurement below the armhole. Then I added another 3″ to that length when I raised the armhole, when I should actually have lowered the shoulder by the 3″ (which would also have been a lot simpler and required a lot less unravelling)! And to make it worse, the cardigan was worked bottom up, so removing length from the top would have been easy, but to remove length from the bottom? Not simple. Crochet can easy be unravelled from the top edge, but not from the starting edge.

What to do now? I didn’t want to start again… and I refused to give up when I was so close! So I figured out a way to remove rows from the starting edge. It’s actually not that difficult, but you have to be brave to do it. I discovered that you can snip through the row below the new bottom row, pull out each stitch in turn, and then pick up both loops at the bottom of each stitch in turn, to form a new sl st edging. You have to unravel the last couple of stitches though (not cut through them) to leave you a long ‘starting’ end to weave in – you don’t want all your work to come undone later!

The fix worked like magic – you really can’t tell that there was ever a mistake. I’m much happier with the length now (still have to add those buttons at some point though): 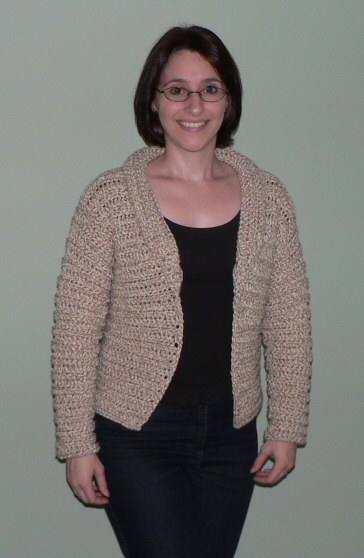 By the way, it’s not really wonky along the side there – it’s just the angle in the pic

I’ve learned my lesson about modifying patterns – think carefully before you make any changes! It’s just like ‘measure twice, cut once’ in sewing.

I’ve decided that, as the sleeve that I designed myself is the most successful part of the cardigan, I’m going to try to make my next sweater without using a pattern at all… Am I ambitious or just crazy? I don’t know yet, but I like a challenge!