…a project 3 years in the making.

Way back in January 2007, I posted a cryptic wip (work-in-progress) of a FIMO sculpture I’d started:

Can you tell what it is yet? 😉

Yes, I’m a lifelong Star Wars geek, and I was making a model R2-D2. I finished and baked the head, and then… nothing. I’d actually intimidated myself – the head was so detailed and so good that I didn’t think I’d be able to make a body to do justice to it! Also, I really wanted the head to be jointed so that it could rotate, and I wasn’t quite sure how to accomplish that. I filled a page in my notebook with sketches and ideas, but I never got any further than that. And the  longer I waited, the less likely it became that I’d ever finish my R2 project 🙁

This Christmas, I decided that after working myself so hard for an entire year (never work for me – I am a demanding boss!) I’d take a week off to spend time with Dave and just relax. And relaxing, for me, involves making stuff, so I got out the FIMO and set to work. A week and many baking sessions in the toaster oven later, here is the finished R2-D2: 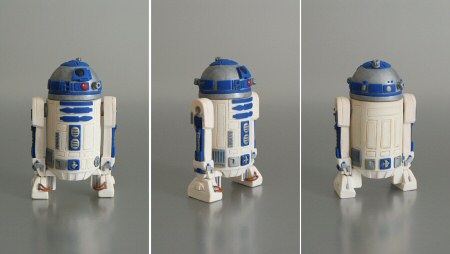 I strongly suggest you click through to see the larger picture! You can’t really see the detail at this scale.

I am so happy with how he turned out! He is perfectly hand-sized at 8cm (just over 3″) tall, and he comes with a secret special feature: yep, I managed to get that rotating head working! I embedded a rare earth magnet into his body, and stuck a second magnet to the base of his head. This lets the head rotate smoothly and freely. Not sure what I’m talking about? Here’s a shot of the inside: 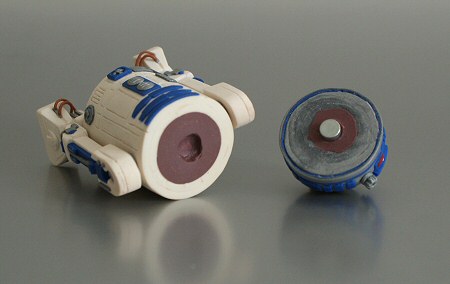 (The purple clay inside the body is just a core I made by smushing all my leftover unbaked scraps from past FIMO projects together. As it doesn’t show in the finished piece, there’s no point in wasting a huge lump of new clay, so I made a cylinder from the scrap clay, baked it, and then covered it in a sheet of white clay to form the torso.)

The head magnet fits perfectly inside the recessed hole. There’s a second magnet just beneath the surface of the clay at the bottom of the hole, so the head doesn’t fall off the body but can swivel freely. The rare earth magnets are so strong that, even when separated by a thin layer of clay, you can safely lift R2 by his head and his body will stay firmly attached. Here’s a little animation of his head moving:

This project was a great break from my normal life. I love the enforced calm that comes with my polymer clay work.  It’s so detailed and precise that I have to empty my mind and just concentrate on slicing off that sliver of clay, or smoothing out that fingerprint – it’s almost meditative. My batteries are recharged and I’m ready to tackle 2010!